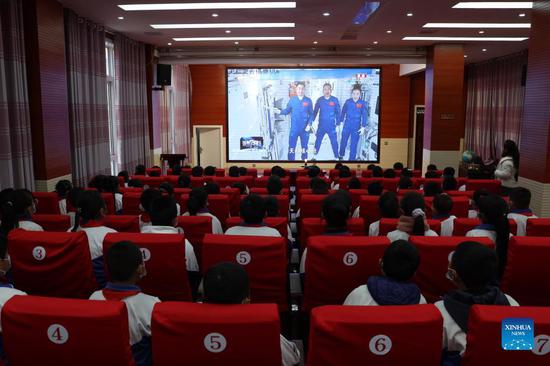 Zhai Zhigang, Wang Yaping, and Ye Guangfu delivered the lecture starting at 3:40 p.m. (Beijing Time) on Thursday and it was no ordinary discourse.

It originated some 400 km above Earth in China's space station.

A total of 1,420 students attended the lecture from five classrooms across China. The primary classroom is located in the China Science and Technology Museum. Classrooms have also been set up in Nanning in south China's Guangxi Zhuang Autonomous Region and Wenchuan County in Sichuan Province, Hong Kong and Macao.

Assisted by the other two crew members, Wang first gave a tour around, telling students how they go about their lives and work on the space station.

She showed them the microwave, water dispenser and refrigerator in the space kitchen. She opened the mini-fridge and took out a fresh apple.

In response to a Hong Kong student's question about water, Wang said the water they drink is recycled, noting that there is no difference in taste between regular and recycled water. With a water recycling system, every drop of water is made full use of in the space station, she said.

Wang said the astronauts may look a little chubby and puffy as the microgravity in space can affect blood circulation. They use a treadmill, spin bike and resistance bands to stay healthy. She showed the students how to increase their upper limb strength with the bike by putting her hands on the pedals and floating upside down.

Zhai introduced the special uniform Ye was wearing during the class. According to Zhai, it is called a "penguin jumpsuit" and it has multiple elastic bands inside to help the astronauts maintain their muscle strength.

Ye then demonstrated experiments related to cell growth in the weightless environment in space. They compared the growth and shape of cells in artificial gravity and zero-gravity, so as to study their changing rules and mechanisms.

Ye showed the students images of myocardial cells observed under a fluorescence microscope. "They look amazing in space, as if they are beating," he said, explaining that the beating and gleaming occurred as the living cells had a bioelectrical reaction.

Wang asked both the students on the ground and her teammate, Ye, to do the turn-around movement.

The students were surprised to see that Ye could not do it by just turning his body. He finally made it with specific motions, like moving a single arm in a circle or stretching both arms flat.

In a series of experiments related to water, Wang and Ye showed the students how liquids behave differently in space due to the absence of gravitational force.

In a buoyancy experiment, Wang put a table tennis ball in a glass of water. Instead of floating to the surface like on Earth, the ball remained in the middle of the water. Buoyancy almost disappeared in the weightless environment.

She created a water film using a metal ring and a bag filled with water. Then she placed on the water film a flower bud she and her daughter folded with paper before the space journey. The bud rotated magically on the film and "blossomed."

"The flower reminds me of my daughter," Wang said to the students. "You are all budding flowers of our country. I hope your dreams can blossom in the vast universe."

Wang's five-year-old daughter was among the students in the classroom at the China Science and Technology Museum, watching her mom's lecture.

Wang then injected water into the film, and it became a transparent water ball. Through it, Wang's inverted image appeared. "We know that this phenomenon is called convex lens imaging." She explained.

However, when Ye injected a bubble into the water ball, two images of Wang appeared, with the big image inverted and the small one in the bubble upright.

"If you are interested, you can later think about the reasons for the phenomenon," Wang said to the students.

After that, Wang pumped the bubble out and injected blue pigment. Then, she dropped an effervescent tablet into the blue ball, producing many little bubbles.

"In the weightless environment in space, bubbles can not leave the water ball, as they do on Earth." She made a sniffing gesture and said: "There is also a smell of fragrance."

At the end of the 60-minute class, the three astronauts tried to satiate students' curiosity through a real-time question and answer session.

How do oxygen and carbon dioxide recycle on the space station? Can the students write emails to the astronauts? Do stars still twinkle in space? Have they spotted any UFOs? Does it feel like taking a roller coaster when they leave and return to Earth? Do they have dreams while sleeping in space?

The Shenzhou-13 trio answered the questions and wrapped up the class with their best wishes.

"The secrets of space and science are boundless, and the future is yours," said Zhai, commander of the Shenzhou-13 mission.

In June 2013, Chinese female astronaut Wang Yaping, assisted by the two other crew members aboard the Shenzhou-10 spacecraft, delivered the country's first live space lecture to over 60 million schoolchildren across China.