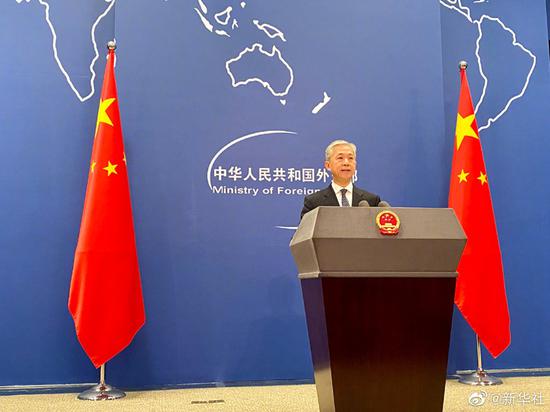 Anyone who "dares to walk again the old path of militarism and challenge the bottom line of the Chinese people" will "have their heads bashed bloody", Beijing warned on Wednesday after a speech delivered by former Japanese prime minister Shinzo Abe.

Reuters quoted Abe as saying at a forum on Wednesday that "a Taiwan emergency is a Japanese emergency, and therefore an emergency for the Japan-U.S. alliance".

It said Abe, who stepped down as prime minister last year, is head of the largest faction in Japan's ruling Liberal Democratic Party and remains politically influential.

Pointing out Abe had ignored the basic norms guiding international relations and the principles stipulated in the four political documents issued jointly by China and Japan, Wang said Taiwan is a sacred territory of China and no foreign interference is allowed.

"Japan, which used to rule Taiwan as its colony for five decades, has committed crimes too numerous to record, and shoulders severe historical responsibilities to the Chinese people," Wang said, adding that no one should underestimate the resolve, will and ability of the Chinese people to defend the country's national sovereignty and territorial integrity.

In another development, Wang announced on Wednesday that Yang Jiechi, a member of the Political Bureau of the Communist Party of China Central Committee, will hold consultations with South Korean National Security Adviser Suh Hoon in Tianjin on Thursday.

Yang, also director of the Office of the CPC Central Commission for Foreign Affairs, will have an in-depth discussion with Suh on bilateral relations as well as international and regional issues of mutual concern, Wang said.