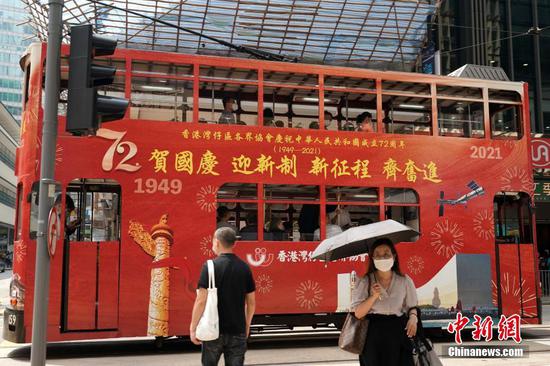 A tram with the words "Celebrating the 72nd anniversary of the founding of the People's Republic of China" passes through the streets of Central, Hong Kong, Sept. 30, 2021. (Photo/China News Service)

Hong Kong has fully restored its normal order of security with the removal of water barriers outside the Hong Kong Special Administrative Region (HKSAR) government headquarters on Sunday, said John Lee Ka-chiu, chief secretary for administration of the HKSAR government.

Lee said in a blog post that the clearance at the headquarters which symbolizes the core of the HKSAR government, points to a secure, stable and confident Hong Kong, adding that similar barriers in other locations have been or will be removed as well.

In his post, Lee said that compared to the riots in 2019, in this year's National Day, Hong Kong residents held various activities to joyfully celebrate the holiday.

With the immediate effects of the national security law in Hong Kong, anti-China forces have been reduced across the board, and external forces dare not to intervene in Hong Kong affairs blatantly, he said.

The principle of "patriots administering Hong Kong" has restored rationality in the Legislative Council (LegCo) and stopped it from being a tool for foreign agents to paralyze or subvert the HKSAR government any more, Lee said, adding that the current-term LegCo is expected to pass over 40 ordinances and allocate funding of 280 billion Hong Kong dollars (36 billion U.S. dollars) to stimulate Hong Kong's construction, development and employment.

Lee said the restoration of security consolidates the foundation for Hong Kong's development and prosperity, noting that he is highly confident that Hong Kong has a bright future with unlimited opportunities brought by programs such as China's 14th Five-Year Plan, the Guangdong-Hong Kong-Macao Greater Bay Area and the Qianhai plan, as well as joint efforts of the HKSAR government, the general public and all sectors.