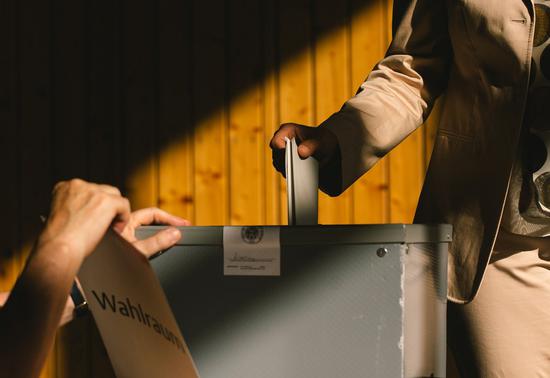 A voter casts a ballot at a polling station in Cologne, Germany, Sept. 26, 2021. (Photo by Tang Ying/Xinhua)

This came after Merkel, who has been the German chancellor for nearly 16 years, announced in 2018 that she would not seek a fifth term, and followed nail-biting campaigns by major parties this year.

Though Merkel's era is coming to an end, the Iron Lady's legacy is widely expected to remain consequential, as her political wisdom of championing pragmatism and multilateralism continues to be valuable and insightful in guiding Germany's future relations with Europe and the rest of the world.

The SDP won Sunday's elections with 25.7 percent of the vote, while the conservative union of Merkel's Christian Democratic Union (CDU) and its sister party Christian Social Union (CSU) took 24.1 percent, the results showed.

Olaf Scholz, the SPD's chancellor candidate and also incumbent vice-chancellor and finance minister, received applause from his party in the SPD's headquarters in Berlin after the preliminary exit poll had projected the leading position of his party.

"I'm happy to see so many here and of course I'm happy about the election result," he said.

With Annalena Baerbock as chancellor candidate, the Greens garnered 14.8 percent of the vote, making it the third-largest political faction in the parliament, followed by the business-friendly Free Democratic Party (FDP) and the far-right and Eurosceptic party Alternative fuer Deutschland (AfD), according to the Federal Returning Officer.

Both Scholz and his main rival, Armin Laschet, the CDU/CSU chancellor candidate and also minister-president of the North Rhine-Westphalia state, have expressed the wish to get the negotiations on forming a new government done speedily.

During her tenure, Merkel has brought economic prosperity to Germany by shaking off the tag of "sick man of Europe" and helping the country achieve a national budget balance and almost full employment before the pandemic.

Merkel kept her composure when facing the European debt crisis a decade ago by imposing austerity measures on financially weak member countries of the eurozone. When a refugee crisis got worse in 2015, she displayed stoic calm and strength, saying: "We can do this."

An advocate of multilateralism and win-win diplomacy, Merkel had strongly criticized America's isolationism and some of its other controversial policies and measures, standing for cooperation among countries to address common challenges, such as climate change, anti-globalization, inequality, and the COVID-19 pandemic.

Merkel has also been committed to promoting friendly and pragmatic exchanges and cooperation between Germany and China. As a result, the bilateral relations have witnessed steadfast development, with trade and economic cooperation as a highlight.

Official statistics show that China has been Germany's largest trading partner since 2016, with two-way trade amounting to around 248.4 billion U.S. dollars in 2020, despite the impact of the COVID-19 pandemic.

In an interview with Xinhua, former German Chancellor Gerhard Schroeder urged the next government to keep a pragmatic China policy. Professor Ferdinand Dudenhoeffer, director of CAR Center Automotive Research Duisburg, expressed confidence that the Germany-China relations can continue to be shaped in a sensible way.

Despite their various divergences, the German parties have a lot in common in their policy priorities in such areas as environment, economy, and security, offering a glimpse of major domestic challenges for Merkel's successor.

Earlier this year, Merkel's cabinet agreed on a climate plan aimed at achieving carbon neutrality by 2045. Scholz and Annalena Baerbock, the chancellor candidate of The Greens, have both expressed support for tackling climate change.

Thiess Petersen, senior adviser at the German Bertelsmann Foundation, told Xinhua that he thinks the new government should take up three major tasks immediately when it comes to economic policy -- transforming the economy to a climate-neutral one, reducing rising debt, and dealing with demographic change.

For over a decade, Germany has been playing an essential role in the European Union (EU) as well as in multinational frameworks, with Merkel's stewardship as a key factor.

As Merkel is to exit from power, Brussels is expected to wait until a new German government is formed before making major decisions, such as approving a package of measures to counter climate change. Paris is reportedly concerned that a standoff in Berlin could put a strain on the French presidency of the EU Council beginning early next year.

Besides, it's widely believed that Germany will seek to achieve strategic independence amid the cooling of the trans-Atlantic relationship due to fickleness from the United States.