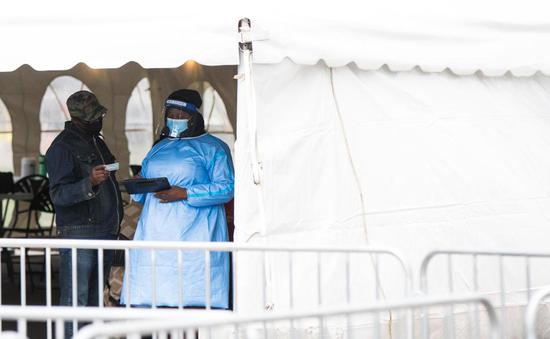 A medical worker checks a man's information at a vaccination clinic in Toronto, Ontario, Canada, on May 11, 2021. Ontario, Canada's most populous province, announced on Tuesday it will stop administering of the first doses of the AstraZeneca-Oxford COVID-19 vaccine, effective Tuesday, due to increased reports of blood clots. (Photo by Zou Zheng/Xinhua)

Ontario, Canada's most populous province, announced on Tuesday it will stop administering of the first doses of the AstraZeneca-Oxford COVID-19 vaccine, effective Tuesday, due to increased reports of blood clots.

"This decision was made out of an abundance of caution because of increased instances of vaccine-induced immune thrombotic thrombocytopenia," said Ontario's Chief Medical Officer of Health David Williams at a news conference on Tuesday afternoon.

At least 12 cases of vaccine-induced immune thrombotic thrombocytopenia have been confirmed out of more than 2 million doses given. Three women have died in connection with the condition.

Ontario is preparing guidance for people who already received the first dose of AstraZeneca on what to do next, Williams said.

Ontario reported there are 49,280 doses of the shot remaining in the province out of over 707,000 received.

Tuesday morning, Ontario reported 2,073 new cases of COVID-19 and 15 additional deaths. Hospitalizations in the province stood at 1,783, with 802 people in ICU due to COVID-related illness.

Ontario's announcement comes hours after Alberta province said it won't give out more first doses of the AstraZeneca vaccine for the time being because there aren't any confirmed shipments coming.

The AstraZeneca vaccine was being offered to individuals aged 40 and up at numerous pharmacies in Ontario.

Canadian Prime Minister Justin Trudeau urged provinces today to maintain strict public health measures until COVID-19 case counts are much lower than they are now so that Canadians can enjoy a "one-dose summer."

Trudeau told a press conference that with the steady supply of vaccines now streaming into the country, there will be enough shots to immunize every eligible Canadian with at least one dose by the end of June.

He said tough public health restrictions, like the lockdowns in Ontario, should be kept in place for the foreseeable future to drive COVID-19 case counts to more manageable levels. "We can have a better summer, a one-dose summer."

Trudeau said provinces should begin to lift public health restrictions only once 75 percent of the adult population has had at least one vaccine dose.

He said that a one-dose summer would be followed by a "two-dose fall," when many more Canadians will have access to a second booster COVID-19 shot.

According to the Public Health Agency of Canada, 40 percent of the adult population has had one shot already.