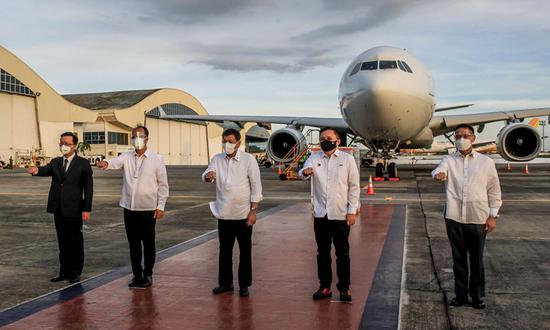 Philippine President Rodrigo Duterte (C) stands with Chinese Ambassador to the Philippines Huang Xilian (1st L) and other officials upon the arrival of government-purchased Sinovac COVID-19 vaccines in Manila, the Philippines, on March 29, 2021.(Photo: Xinhua)

The Philippines speaks highly of the COVID-19 vaccines made by China and hopes to purchase more, and is not returning them, as some media reports recently claimed, said the Chinese Ambassador to the country.

Ambassador Huang Xilian made the remarks in an interview with China National Radio on Sunday.

"Some media reports recently claimed that President Duterte reached out to me and wanted to return the COVID-19 vaccines China had provided. These reports are totally fabricated and spread incorrectly," Huang said.

"Only a few days ago, President Duterte told me that he always had faith in the Chinese vaccines, believing in their safety and effectiveness. He appreciated the key roles the Chinese vaccines had made in the fight against the epidemic in the Philippines, as the country is looking to purchase more," Huang said, noting that Duterte recently also publicly stated that he would be soon taking the second shot of the vaccine made by China's Sinopharm, which was approved by the World Health Organization for emergency use on Friday.

Since the first batch of China-aid COVID-19 vaccines arrived in Manila in February, the Philippines has received delivery of five million doses either donated by China or purchased from China, Huang revealed.

China is not only the first country to provide vaccine aid to the Philippines, but also the first to provide them through commercial channels, the ambassador said, noting that China's Sinovac vaccines have become the main option in the country, as more than 90 percent of vaccines acquired by the Philippines are Sinovac's.