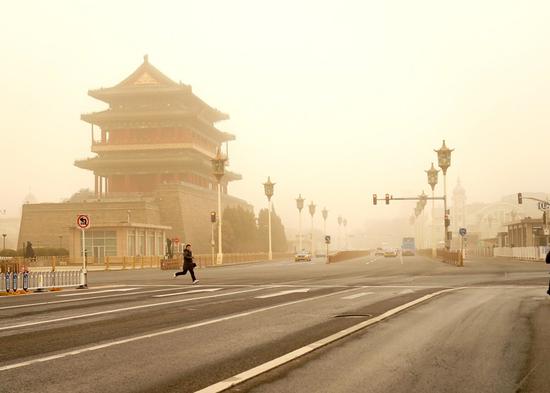 The Zhengyang Gate is seen shrouded in dust in Beijing, capital of China, March 15, 2021. Beijing was enveloped in yellow dust on Monday morning with visibility at less than 1 km, as the city's meteorological department issued a yellow warning for sandstorms, the third-most hazardous level. (Xinhua/Zhang Chenlin)

"Environmental and air pollution issues know no borders," said spokesperson Zhao Lijian, noting conclusions on the origins must have a basis in scientific monitoring and comprehensive analysis.

Media reports from the Republic of Korea quoted the Korea Meteorological Agency as saying that sandstorms originating from China have recently invaded Korea, causing a significant decline in air quality there.

Zhao told a news briefing that according to the analysis of the Chinese monitoring agency, the sand and dust weather originated outside China. China was only a "stopover."

"I have noticed that the Mongolian government recently released relevant news on the hazards of sandstorms, but the Chinese public did not criticize Mongolia because it may be the 'previous stop'," Zhao added.

"This not only benefits the country but also constitutes a huge contribution to improving air quality in the region," Zhao said.

The dusty weather shows that there is still a lot to do in environmental governance cooperation, Zhao said. He added that China is willing to work with neighboring countries and the international community to promote regional and global environmental governance and protection and make positive contributions to building a beautiful and clean world.