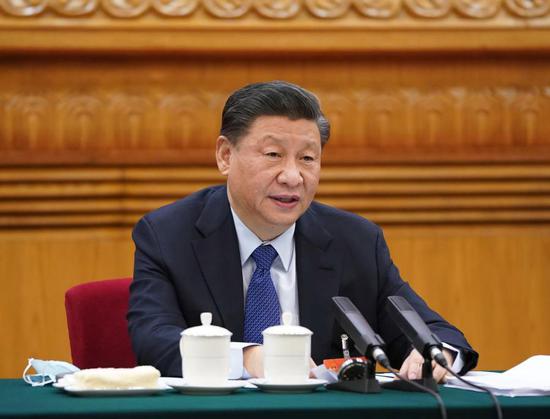 President Xi Jinping, also general secretary of the Communist Party of China Central Committee and chairman of the Central Military Commission, takes part in a deliberation with lawmakers from Qinghai province, at the fourth session of the 13th National People's Congress in Beijing, March 7, 2021. (Photo/Xinhua)

Tashi Dorje, a national legislator from Qinghai province, was excited when talking about his meeting with President Xi Jinping during the just-concluded two sessions in Beijing.

When Xi took part in discussions with the province's deputies to the 13th National People's Congress, the country's top legislature, on March 7, Tashi Dorje told Xi about the development of his hometown in the Yushu Tibetan autonomous prefecture, which was hit by a 7.1-magnitude earthquake about 11 years ago. The disaster flattened a town and claimed more than 2,600 lives.

"I have been paying attention to Yushu's post-quake recovery all these years," Xi said. He recalled his visit to Yushu after the earthquake in June 2010, when he was vice-president. "I flew directly to Yushu. I went to a village more than 4,000 meters above sea level. The damage there was serious."

Tashi Dorje told Xi that great changes have taken place in his hometown. After the earthquake, the people of Yushu quickly rebuilt their homes, and all the rural people in the prefecture have been lifted out of poverty. "Now the streets of Yushu are cleaner, the houses are better and the milk tea is sweeter."

Xi asked in detail about people's livelihoods in the prefecture, and said he is confident Yushu will develop even better amid the nation's efforts to strive for high-quality growth.

Every year when China holds the annual sessions of the NPC and the National Committee of the Chinese People's Political Consultative Conference, the top political advisory body, Xi always joins other legislators and political advisers in discussing issues of national importance, such as poverty alleviation, environmental protection, reform and opening-up, and technological innovation.

And during this year's two sessions, he talked more about "people's well-being" and "high-quality development", and urged officials to stick to the people-centered philosophy and enable the results of high-quality growth to meet people's aspirations for a better life.

He told the legislators from Qinghai province that high-quality development remains the theme for China's social and economic growth in the 14th Five-Year Plan (2021-25) period and beyond, and it matters to the overall situation of the country's socialist modernization drive.

He further explained that pursuing the high-quality development path calls for upholding the people-centered development philosophy and sticking to innovative, coordinated, green, open and shared growth. It is not only related to economics, but covers all aspects of socioeconomic development.

Liu Shijin, deputy director of the Economic Affairs Committee of the CPPCC National Committee, said that with the growing prosperity in recent years, people have more diversified requirements for living a better life.

China's pursuit of high-quality development aims to further improve people's living conditions not only in the economic and cultural aspects, but also in terms of their living environment, Liu said.

When Xi met legislators from the Inner Mongolia autonomous region, environmental conservation was among the main topics of discussion.

He has always stressed a "holistic approach" to conserving mountains, rivers, forests, farmland, lakes and grasslands to achieve sustainable growth. This time, he added deserts to the list of priorities.

Zhou Yizhe, an NPC deputy from Inner Mongolia who works at a tree farm, told Xi that he used to be a logger, but now works as a forest ranger. The tree farm where he works has completely abandoned timber felling, and has shifted its focus to environmental protection.

Zhou said that more wild animals are coming to the tree farm now, and research has indicated that the ecosystem in the forests and wetlands has greatly improved.

"Your identity shift from a logger to a forest ranger epitomizes our country's transformation in industrial structures," Xi said after hearing Zhou's story.

Highlighting the concept of "green GDP", Xi said that maintaining a good environment is of enormous value. He called on Inner Mongolia to continue to fight pollution and improve the environment in both urban and rural areas.

As the COVID-19 pandemic still rages globally and China is also facing the risk of the resurgence of the virus, Xi stressed giving priority to safeguarding people's health when he joined discussions with national political advisers from the education, medical and health sectors in a joint group meeting on March 6.

Since the outbreak started, Xi has required "putting people first" and "putting people's lives foremost" in the fight against the virus. As China has made strategic achievements in epidemic control, he urged efforts to accelerate the implementation of the Healthy China Initiative, with an emphasis on major diseases and problems that matter to people's health.

People's health is the foundation of a civilization's progress and an important indicator of a nation's prosperity, he said.

During discussions with legislators and political advisers, Xi underlined the need to make consistent efforts to solve the problems that matter to people's livelihoods, including employment, education, social security, healthcare and housing, and improve the accessibility of public services.

Efforts should also be made to advance coordinated development between urban and rural areas and fully carry out the rural vitalization strategy, in order to improve the living conditions of urban and rural residents, he said.

Ma Shanxiang, a community worker in Jiangbei district of Chongqing, said he was impressed by Xi's dedication to people's welfare. He knows very well what people are concerned about and what they need, Ma said.

Xi attaches a great deal of importance to employment, which is the top concern for people in order to ensure stable livelihoods, said Liu Wenxin, chairman of Wenxin Xinyang Tea Company Ltd in Xinyang, Henan province.

During the 14th Five-Year Plan (2021-25) period, his company will continue to help rural development and create more jobs, Liu said.