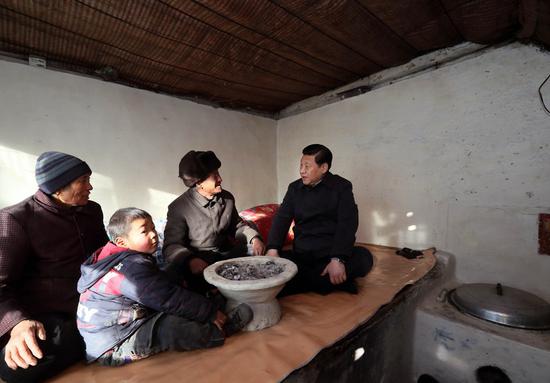 Xi Jinping (R), general secretary of the Communist Party of China (CPC) Central Committee and chairman of the CPC Central Military Commission, visits the family of Tang Rongbin, an impoverished villager in the Luotuowan Village of Longquanguan Township, Fuping County, North China's Hebei province. Xi made a tour to impoverished villages in Fuping County from Dec 29 to 30, 2012.(Photo/Xinhua)

The village where Gu Rongjin has lived for his entire life was on the verge of disappearing 10 to 20 years ago, with few means to support local livelihoods, its young people migrating elsewhere, the farmland unattended and the village school closed.

Luotuowan, a village in Fuping county of Hebei province, located at the foot of high mountains and only about three hours' drive from Beijing, used to typify China's rural poverty. Its residents lived on a meager per capita income of 950 yuan ($147) in 2012, and over 79 percent of its residents lived below the official poverty line.

On Dec 30, 2012, the village welcomed an important guest. Xi Jinping was on a tour to assess the real situation of China's poor areas less than two months after he was elected general secretary of the Communist Party of China Central Committee.

Gu, 73, was then the Party secretary of the village and still has a vivid memory of Xi's tour. "It was about 9 am, and many of us still hadn't had breakfast. I remembered him lifting the pot lid to see what was being cooked. He wanted to see the real situation," Gu recalled in a phone interview.

Sitting down with villagers in their rundown homes, Xi made a powerful appeal about the need to fight poverty.

"As long as we have confidence, even loess can be turned into gold," Xi said during his visit to the county, in remarks that were published last week by Qiushi, the flagship magazine of the CPC Central Committee.

More than eight years on, as China is set to convene a grand meeting on Thursday in Beijing to summarize its poverty alleviation outcomes and honor outstanding units and individuals who have made key contributions to work on this front, analysts said Xi's remarks in Fuping pointed the way for China's poverty reduction effort starting from 2012, mapping out targets and priorities and laying the foundation for the targeted alleviation strategy.

China has secured a victory in its fight to eliminate absolute poverty in rural areas after having lifted nearly 100 million people out of extreme deprivation and ensuring that poverty was eliminated in all 832 national-level poverty-stricken counties by 2020.

"Xi's remarks on his visit to Fuping emphasized a people-centered philosophy, a key development concept that was fully demonstrated during China's anti-poverty campaign," said Huang Jikun, director of the China Center for Agricultural Policy at Peking University.

His remarks also set the tone for the country's efforts to develop a model for poverty alleviation, including steps to attract participation from private capital and focusing on the capacity building of impoverished groups and areas, he said.

The trip, which marked the beginning of China's intensified poverty reduction efforts, was followed by a host of inspection tours made by Xi and meetings he chaired focusing on poverty alleviation in recent years.

Xi first set out the targeted poverty reduction strategy during his visit in November 2013 to Shibadong, an impoverished village in Hunan province.

At a national work conference on poverty alleviation in November 2015, Xi expounded on the goals, tasks and major measures in the fight against poverty and called for the use of targeted steps in the process.

He listed the fight against poverty as one of China's three critical battles in a report to the 19th National Congress of the CPC in October 2017, saying that "poverty alleviation should reach those who truly need it and deliver genuine outcomes".

China has secured a major victory that is worthy of esteem from the whole world and the country has reshaped the look of its poor areas, improved the conditions of production and life and improved the quality of life of the public during the process, Xi said at a key Party meeting in December.

Official data shows that the average yearly income of China's poor population has jumped from 2,982 yuan in 2015 to 10,740 yuan in 2020, with their access to education and affordable healthcare continuously on the rise.

"Poverty reduction is not something that happens by itself; improving living conditions, investing in infrastructure and creating jobs requires careful planning," said Peter Frankopan, a professor of global history at Oxford University.

"Large-scale changes are difficult to bring about－and the story of poverty alleviation in China as well as in other parts of the world is one of the most important developments in recent decades," he said in an e-mailed comment.

China's experience suggests that stable growth of the agricultural sector and quick transformation of the rural economy is the most important way to eliminate absolute poverty in rural areas, said Huang from Peking University.

The country's experience also shows that an institutional arrangement that is led by the government, involving the whole of society, prioritizing the use of a targeted alleviation strategy and supported by the social aid program is the most important anti-poverty strategy and experience for success, he said.

In 2014, China introduced a national poverty registration system－a dynamic archive that identified the regional distribution of poverty and the reasons for poverty. It was a move that facilitated the targeted poverty alleviation campaign as it provided specific poverty data about villages, households and individuals.

Yu Xiaohua, a professor of agricultural economics at the University of Goettingen in Germany, said the precise identification of poor groups enabled the government to extend support on a long-term basis.

"Meanwhile, China also adopted different policies, such as the development of industries and relocating those living in poor natural conditions, based on the different reasons leading to poverty," he said.

For developing nations, an important lesson is that the priority given by the government and the strong fiscal strength accumulated from quick economic growth offers the strongest underpinning in the anti-poverty fight, he said.

A policy document issued on Sunday by the CPC Central Committee and the State Council, also known as the No 1 document of the year, highlighted the need to align efforts to consolidate the poverty alleviation outcomes and promote the vitalization of rural areas while also guarding against the risk of large numbers of individuals falling below the poverty line once again.

Tang Renjian, minister of agriculture and rural affairs, said at a news briefing on Monday that even though poor areas and groups have shaken off poverty, their foundation of development remained unstable and the task to prevent the recurrence of poverty remains formidable.

Yu, the professor, pointed out that offering equitable public services in areas such as healthcare, education, care for the elderly and unemployment insurance is important, in addition to steps to expand the added value of agricultural products and enlarge the income channels of farmers.

"To reach the target of attaining common prosperity by 2035, the biggest challenge is to enable the sustained quick growth of impoverished families' incomes in rural areas," said Huang from Peking University.

He cited data from the National Bureau of Statistics that shows the per capita income of the poorest 20 percent of rural families only reached 4,263 yuan in 2019, which highlighted the risk of the recurrence of extreme poverty among such families.

"Thus it is important to make the improvement of the livelihoods and incomes of such families a top priority in the rural vitalization strategy," he said.

Like the numerous villages reshaped by the poverty reduction campaign, Luotuowan has been transformed. Its rundown homes and muddy roads have been renovated into a neighborhood of houses with tiled roofs and a paved road. Supported by industries such as the cultivation of mushrooms, flowers and cherries, the per capita income in the village jumped to 15,660 yuan last year.

"It is impossible to expect all the young people to return, but some are now coming back," said Gu, the villager.

"A village is not merely a place offering agricultural produce, it should also be place with an abundance of good experience," he said.