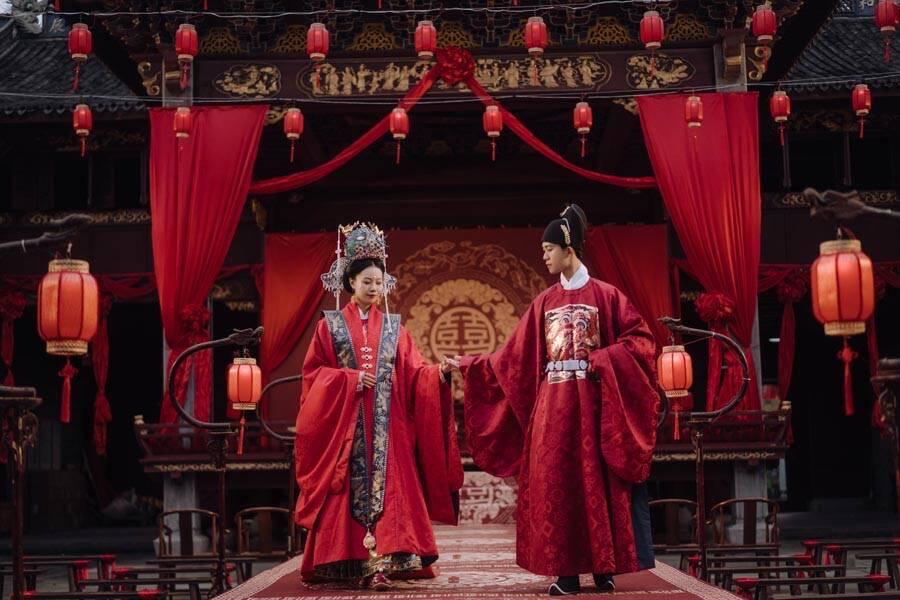 It took her two years to prepare for the big day, and the most spectacular part was over in 30 minutes, Ye Zizhen reports.

It had all the pageantry and pomp of a television period drama, and as is usual with such an undertaking, painstaking months of costume design and planning were involved before viewers could enjoy the splendor of it all.

And, people went in large numbers to the modern-day wedding, with its trappings from centuries gone by.

The venue was a large gray meeting hall, where roof stands resembled stone dragons and the walls were adorned with red silk and dozens of red lanterns dangled from the ceiling. The decorations if seen at any other time would make one think Chinese New Year was just around the corner.

In fact, the day was Nov 29, and the brightest stars were not just the bride and groom but also their entourage, dressed in sumptuous garb inspired by the dynasties of yesteryear.

The bride, Dai Zhenzhen, a 26-year-old woman from Ningbo, Zhejiang province, where the wedding was held, was also the main event planner. 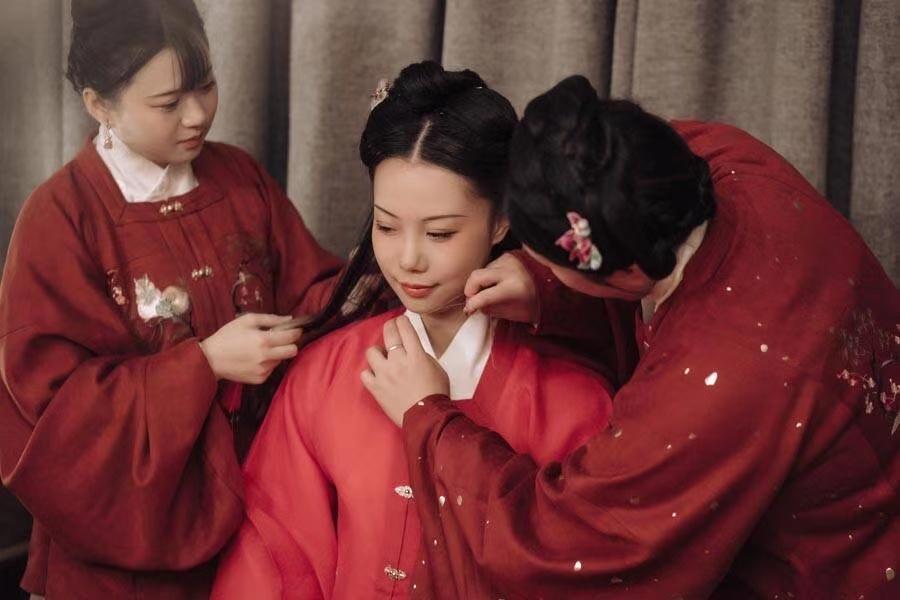 She studied design in college. After graduating in 2016, she had worked as a designer of children's toys before quitting the job two years later to become a photographer.

Dai put two years into designing the wedding. Her enthusiasm for Han Chinese clothing is part of a recent trend, especially among the country's youth.

Han clothing, or hanfu, refers to the clothing of Han Chinese during various dynasties in ancient China. The price of such clothing ranges from hundreds of yuan to hundreds of thousands. The most expensive items are tailor-made, like Dai's wedding dress and many other pieces worn at the ceremony.

Dai says she began buying Han clothing on the internet around 2015.

"I also started to learn about styling, which was very important in ancient China. For example, it was regarded as inappropriate for women to leave their hair loose," Dai says.

"I personally prefer Han clothing of the Song Dynasty (960-1279) and Ming Dynasty (1368-1644) because the styles are more connected with everyday living." 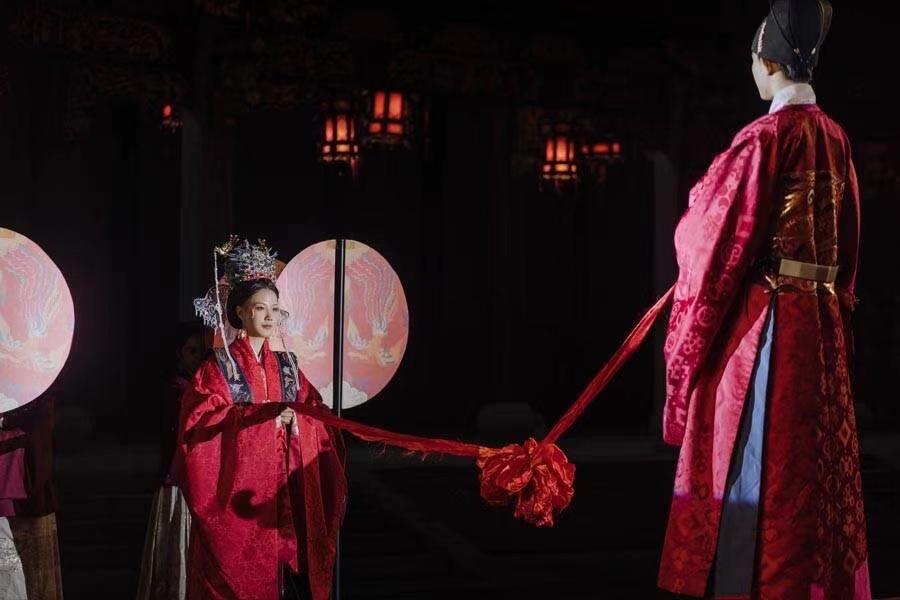 She enrolled in a seven-day intensive styling course in Hangzhou, Zhejiang, where she learned how to do makeup and braid hair.

Doing proper styling for Han clothing for one person can take up to two hours, she says.

However, there is more to this than knowing a bit about styles, and some knowledge of history helps.

She took up photography as a career and specialized in taking pictures of Han clothing. In 2019, Dai began to post videos online, explaining to the uninitiated Han Chinese clothing in all its beauty and intricacy.

"I chose to hold a Ming-style wedding because you can find a lot of books and records of such ceremonies, so I knew I was more likely to get things right," Dai says.

For over two years she pored over historical material and looked at the costumes used in different TV dramas as she prepared for her big day.

The books she studied included Daming Huidian (Code of the Great Ming Dynasty) and Yili Shihunli (The Book of Rites: Wedding Ceremonies), the latter being the earliest work in ancient China that recorded wedding protocols.

"In Chinese, the wedding ceremony is called hunli, and li refers to manners and rituals," Dai says.

"Traditional Chinese wedding rituals are performed at sunset, so my wedding began at 5:28 pm." 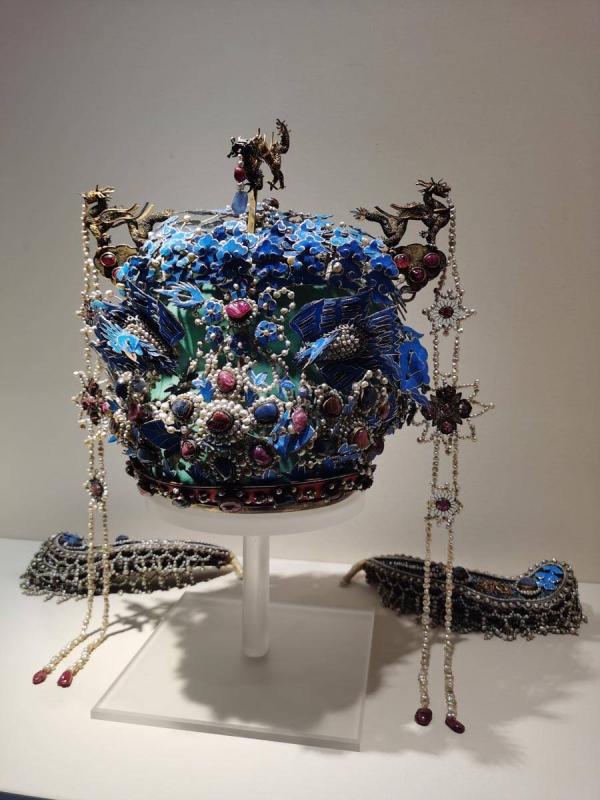 The coronet Dai Zhenzhen can be seen wearing at her wedding is a replica of a Ming Dynasty relic, featuring three dragons and two phoenixes. (Photo provided to China Daily)

The ceremony lasted 30 minutes, and, like a seasoned period-film director who knows how to fictionalize history for dramatic effect, Dai tinkered with a few of the details.

"In real life the throwing of dried longan and peanuts was performed by the bride and her parents in the bridal chamber, but I found the ritual so fascinating that I decided it should be performed in public."

One ritual performed behind closed doors at her wedding, in line with reality, was jiaomian, in which the bride clears any facial hair she has, which is said to suggest a "smooth and happy marriage". Dai did this before she left home.

"In the main ceremony I wore an embroidered robe with a dark indigo vest, a phoenix coronet, which ordinary people wore only at weddings during the Ming Dynasty," Dai says.

The coronet was a replica of the one owned by Ming empress Xiaojing (1565-1611), called sanlongliangfengguan, meaning a coronet of three dragons and two phoenixes. 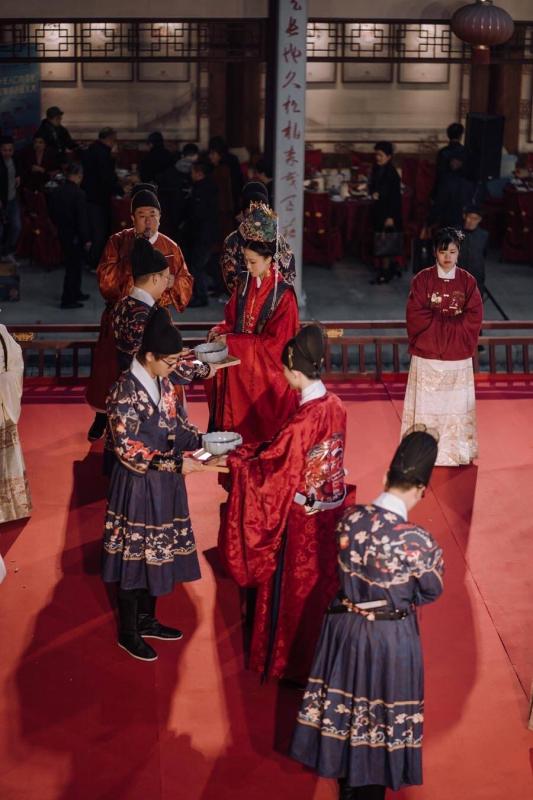 The original coronet was excavated from a Ming tomb and is on display at the National Museum of China in Beijing.

In addition to Dai, eight bridesmaids and groomsmen were clothed in Dai's hanfu creations.

Almost as important as the costumes and rituals to the overall look and feel of the wedding were the props, furnishings and other decorations, Dai says.

"Essentially for this kind of thing you can find all the props you need by shopping online. The palace lantern I used is the same as the one I saw while visiting Huiyingaoli Temple in Hangzhou," she says.

"I also like lamps and candles …which explains all those red lanterns you saw at the wedding."

The lanterns and the rest can now be seen on the video-sharing website Bilibili, on which Dai goes by the username Jingzhishisui.

The video has been viewed 2.17 million times since she posted it online in December. Some viewers comment that it's the most beautiful Chinese-style wedding they have ever seen.

Dai and her husband, Chu Haiting, met while working together. He is a cameraman who occasionally helps her at a film studio.

He also shares her passion for Han clothing, so perhaps for him that two-year wait for their big day did not seem too long.

"It's very meaningful and interesting to learn about traditional clothing," says Chu, 26.

"The wedding plan was my wife's idea and I supported it."

The bride is escorted from her home to that of the groom. The bride's face is kept from view from the groom by handheld fans. The couple burn incense sticks together to pay respects to their ancestors. The groom gives the bride a pair of wooden geese, a sign of eternal love. The couple wash their hands. The couple drink bitter liquor from two halves of a calabash, signaling a willingness to face hard times together. Bridesmaids and the groomsmen throw dried longan and peanuts on the couple. Strands of the couple's hair are tied together and put in a pouch. The couple join hands. The couple signal to the sky, and bow to the Earth and one another.