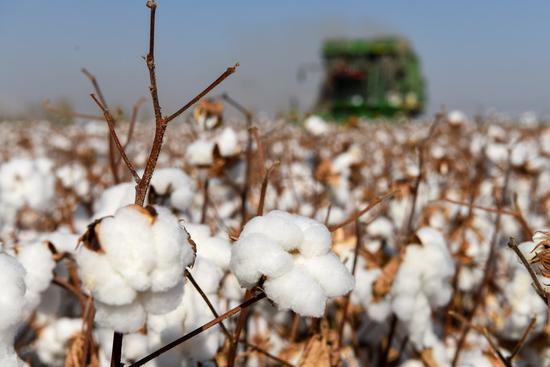 Spokesperson Hua Chunying made the remarks at a daily news briefing when asked to comment on the U.S. decision to block cotton imports from Xinjiang on the pretext of "forced labor."

The U.S. actions violate international trade rules and the principles of market economy, damage global industrial and supply chains, and harm the interests of companies and consumers of all countries including the United States, Hua said.

"It must be noted that helping people of all ethnic groups find stable employment and 'forced labor' are completely different concepts," Hua said, adding that workers of all ethnic groups in Xinjiang choose work of their own will. They voluntarily sign contracts with companies in keeping with the principle of equality and "will not be discriminated against due to differences in ethnicity, gender and religious beliefs," she said.

"Certain U.S. politicians claimed that they care about and protect the rights of ethnic groups in Xinjiang, but on the other hand, they restricted and suppressed Xinjiang's enterprises by using pressure and sanctions and disrupted Xinjiang's stable development and prosperity," Hua said.

China urges these U.S. politicians to respect the basic truth and stop using Xinjiang-related issues to interfere in the country's internal affairs, the spokesperson said, adding that China will continue to take necessary measures to safeguard the rights and interests of Chinese enterprises.