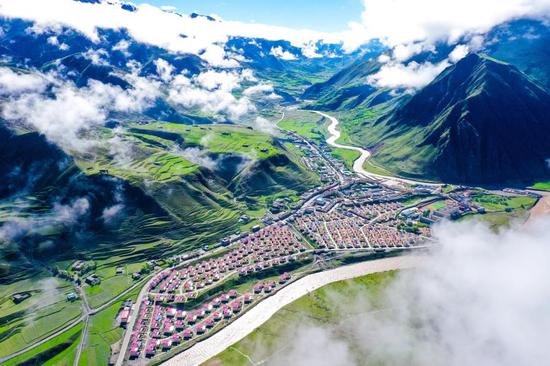 Aerial photo taken on June 14, 2020 shows a relocated area by the Gaqu River in Chido Township of Dengqen County in Qamdo, southwest China's Tibet Autonomous Region. Qadom City has witnessed a total of 194,600 residents, 38,400 households, 1,127 villages and 11 counties get rid of poverty thanks to the poverty alleviation efforts. (Xinhua/Tian Jinwen)

Xi Jinping, general secretary of the Communist Party of China (CPC) Central Committee, said Thursday that China has accomplished its poverty alleviation target of the new era as scheduled and achieved a significant victory that impresses the world.

Through eight years of sustained work, China has lifted all rural poor population under the current standard out of poverty and nearly 100 million poor people have shaken off poverty, Xi made the remarks while presiding over a meeting of the Standing Committee of the Political Bureau of the CPC Central Committee.

China has removed all poor counties from the poverty list, and eradicated absolute poverty and regional poverty, Xi said.

Since the 18th CPC National Congress, the CPC Central Committee has put poverty alleviation in a more prominent position, adopted significant measures with originality and speciality and fought the largest and most vigorous battle in human history against poverty, Xi said.

The significant victory in poverty alleviation has provided a solid foundation for achieving the first centenary goal and greatly enhanced people's sense of gain, happiness and safety, Xi said.

During the poverty alleviation efforts, the CPC Central Committee has upheld the concept of putting people first and taken ensuring a moderately prosperous society for the poor and people of all ethnic groups as the starting point and final goal, Xi said.

At present, the country still faces acute problems caused by unbalanced and inadequate development as well as onerous tasks of consolidating and expanding poverty alleviation achievements, said the meeting.

China should improve the monitoring and assistance mechanism to prevent people from falling back into poverty and continue to track the development of counties, villages and people that have been lifted out of poverty, the meeting noted.

The meeting stressed efforts to ensure steady employment and enhance vocational skills training for people who have been lifted out of poverty, amid moves to strengthen cooperation between the eastern and western regions to boost employment.

China will work to beef up follow-up support for relocated people to ensure that they can settle down, stay employed and steadily get rich, according to the meeting.

With the existing social security system providing basic support, the country will also help families with semi-able-bodied members find jobs nearby so as to ensure their basic livelihood, the meeting noted.