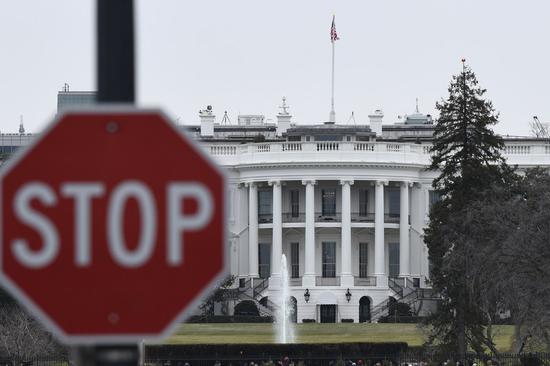 Photo taken on Jan. 12, 2019 shows the White House and a stop sign in Washington D.C., the United States. (Xinhua/Liu Jie)

The ministry's spokesperson Zhao Lijian said this at a routine press briefing in response to recent remarks by Director of the White House Office of Trade and Manufacturing Policy Peter Navarro, who accused the U.S. Democratic Party and China of entering into "a common cause" to defeat Donald Trump by blaming the Trump administration's mishandling of the COVID-19 response.

"Navarro is a habitual liar and rumor-monger who has been spreading 'political viruses' and false information," Zhao said, adding Navarro has zero credibility and dismissing his remarks as groundless.

Zhao said that the American people are in the best position to judge the performance of the U.S. government in fighting the COVID-19 epidemic, and the international community is keeping an eye on it.

"We advise Mr. Navarro and his ilk to put aside the trick of 'shifting blame' and stop their despicable performance, otherwise they will only humiliate themselves," said the spokesperson.

The U.S. election is the internal affair of the United States, he said, noting China has no interest and has never interfered in it.

"We urge U.S. politicians to stop dragging China into its election campaigns out of their own selfish motives," Zhao said.