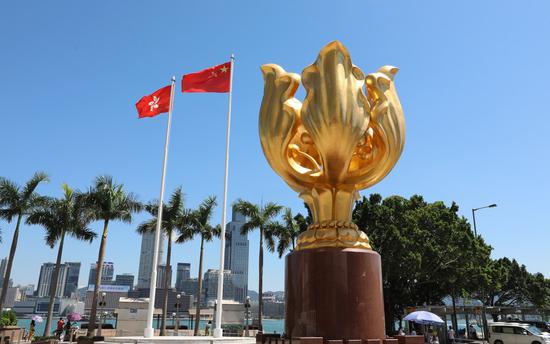 China on Thursday voiced strong dissatisfaction with and resolute opposition to a joint statement on Hong Kong affairs issued by Group of Seven (G7) foreign ministers.

China on Thursday voiced strong dissatisfaction with and resolute opposition to a joint statement on Hong Kong affairs issued by Group of Seven (G7) foreign ministers.

Foreign Ministry spokesperson Zhao Lijian made the remarks at a press conference, saying that China has consistently repeated that Hong Kong affairs are purely China's internal affairs that brook no interference from any foreign government, organization or individual.

The decision by China's National People's Congress (NPC) and the legislation by the NPC Standing Committee is aimed at plugging the loopholes in Hong Kong's legal system to safeguard national security, he said.

Establishing and improving the legal system and enforcement mechanisms for the Hong Kong Special Administrative Region (HKSAR) to safeguard national security from the national level is an embodiment of the "one country, two systems" and will guarantee a steady implementation of "one country, two systems," as well as safeguarding Hong Kong's prosperity and stability, the spokesperson said.

"We have repeatedly said that the core content of the Sino-British Joint Declaration is China's resumption of the exercise of sovereignty over Hong Kong," Zhao said, adding that China's Constitution and the Basic Law jointly form the constitutional basis of the HKSAR.