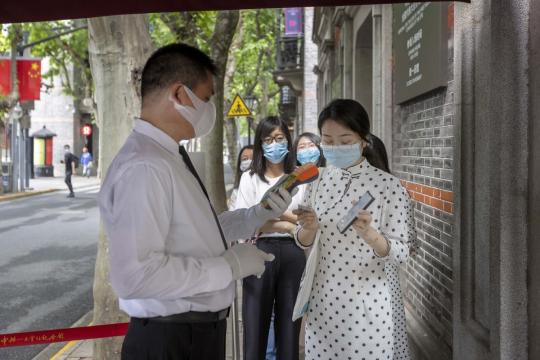 A staff worker takes the tempertaure of visitors at at the Site of the First National Congress of the CPC in Shanghai, on May 27, 2020. (Photo/Xinhua)

No new confirmed cases were reported on the mainland as of Thursday, along with no deaths or suspected cases, according to a release by the National Health Commission on Friday morning.

On Thursday, three patients were released from hospitals and 479 people were discharged from medical observation.

The mainland so far has reported 82,995 confirmed cases of infection, with 70 of them still under treatment and four in critical condition.

A total of 78,291 people have been discharged from hospitals while 4,634 lives were claimed by COVID-19.

According to the commission, the mainland has so far traced 744,228 people in close contact with confirmed patients and still has 5,591 of them remaining in medical observation.

In addition, there are 46 confirmed cases imported from abroad and four suspected cases coming back to the mainland as of Thursday.

The commission said that the mainland has so far confirmed 1,734 coronavirus infections imported from abroad and cured 1,688 people while no deaths were reported.

According to the commission, the mainland reported five new asymptomatic patients as of Thursday with one of them coming back to the mainland, but none were confirmed with infections.

The commission said that a total of 1,552 confirmed cases have been reported from the Hong Kong and Macao special administrative regions as well as Taiwan, with 1,066 in Hong Kong (with four deaths), 45 in Macao and 441 in Taiwan (with seven deaths).