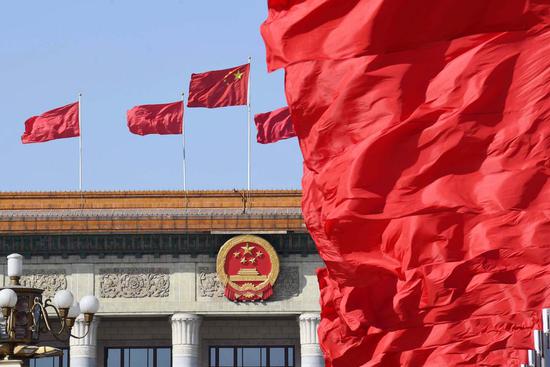 Flags are seen at the Tian'anmen Square and atop the Great Hall of the People during the opening meeting of the second session of the 13th National People's Congress in Beijing, capital of China, March 5, 2019. (Xinhua/Yang Zongyou)

The proposals to postpone China's "two sessions," a key event in the country's political calendar, came out Monday in a timely and responsible manner, as the latest evidence that China is trying its best to buy time for the world to contain the outbreak of novel coronavirus or COVID-19.

The openings of the annual sessions of the National People's Congress, China's highest organ of state power, and the National Committee of the Chinese People's Political Consultative Conference, China's top political advisory body, had been held on March 5 and March 3, respectively, since 1998.

Monday's proposals conform to the reality that China has entered the most crucial stage of fighting the novel coronavirus epidemic and must prevent any risks of rendering the previous sacrifices of the entire nation in vain.

Through arduous efforts, the epidemic overall is generally under control. Outside the hardest-hit Hubei Province, the number of confirmed cases had been declining for 13 consecutive days across China by Sunday. China contains 99 percent of COVID-19 cases within its borders.

Among nearly 3,000 national lawmakers and more than 2,000 political advisors, many of them are fighting at the frontlines. Any lax efforts at this time will cause huge losses, both for China and the world.

The announcement demonstrates a responsible and transparent attitude toward epidemic control work. The proposals will gain wide public endorsement and boost national confidence.

By postponing the sessions to an appropriate time, decision-makers will have more time to examine the current situation and roll out measures more precisely and effectively to restore normal economic and social activity.

At the two sessions, national lawmakers and political advisors are expected to review and discuss a series of work reports which cover every aspect of China's development and the people's wellbeing. Growth targets and reform goals need to be set. Budgets, development plans and laws need to be reviewed and put to vote.

All these should be done on the basis of full awareness about the virus, what the impacts are, how to minimize them and boost development accordingly. The decisions and measures will also be significant to the world as China contributes nearly one-third of global economic growth.

China has given its top priority to ensure the safety and health of the Chinese people and has created a window of opportunity for other countries to intensify preparedness.

The window is still open and the best way to make up for the loss is to tackle the epidemic with speed, determination and unity.