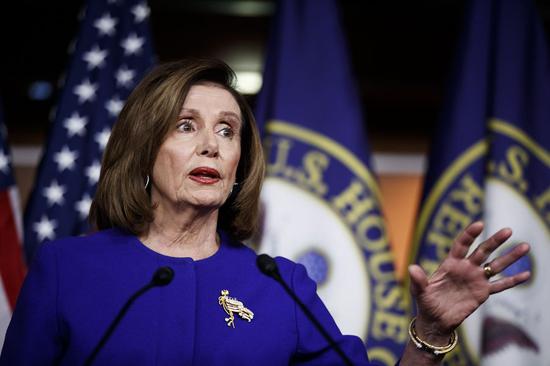 U.S. House Speaker Nancy Pelosi said on Thursday that the White House's rhetoric on China is a "diversion" from its own missteps in handling the coronavirus outbreak.

Speaking to reporters during her weekly press conference on Capitol Hill, Pelosi said what President Donald Trump is saying about China is "an interesting diversion."

"Right now, our focus should be on meeting the needs of the American people," the California Democrat said. "I've even said putting aside how we got here in our own country because we should be using our energy on how we go forward than making judgments about what his administration did or didn't do."

"Instead of diverting attention from mistakes that may have been made here, let's just put that all aside and go forward for what we can do working together for the good of the American people," she noted.

The remarks also came against the backdrop that some Trump administration officials have tried to push a debunked conspiracy theory that the coronavirus originated in a Chinese lab, despite wide scientific consensus that the virus was not man-made or genetically modified.

Weighing in on the issue, Pelosi said "there will be scientists and others who will be tracing, rightfully."

"It's urgent and needed for them to trace the origins of such a pandemic scientifically, but not politically," she added.