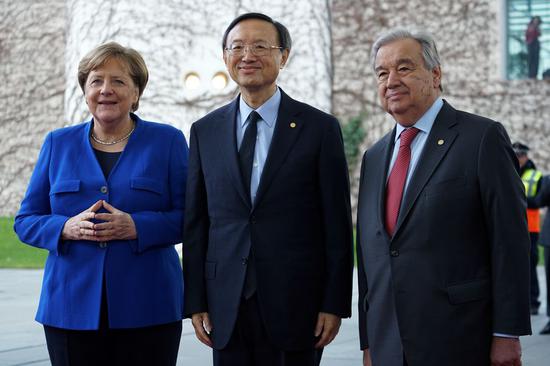 Chinese President Xi Jinping's special envoy Yang Jiechi on Monday reiterated that political solution is the only way for the Libyan issue, expecting a new beginning to address the issue after the Berlin Conference on Libya.

Yang, a member of the Political Bureau of the Communist Party of China (CPC) Central Committee and director of the Office of the Foreign Affairs Commission of the CPC Central Committee, made the remarks at a press briefing after he attended the Berlin Conference on Libya held on Sunday.

Yang said the conflicts and division in Libya have lasted for nine years and has become a miniature of the situation in West Asia and North Africa region, as not only have the Libyan people suffering miseries, but also the security and stability of the neighboring countries and the whole region have been impacted.

The Libyan issue has been spilling over, leading to weapon proliferation, refugees, terrorism and other problems that put serious challenges to the neighboring countries and regions and even the whole world, added Yang.

Yang said the Berlin Conference on Libya is a key event. The presence of many heads of state and government as well as the UN secretary-general showed the great importance that the international community attaches to the political solution for the Libyan issue.

"I attended the conference as Chinese President Xi Jinping's special envoy. I contacted the participants extensively and actively persuaded for peace and negotiations," said Yang.

Yang said at the conference that effort to address the Libyan issue should focus on the fundamental interests of the Libyan people and the future and destiny of the North African country.

All parties concerned should restart dialogue and reconciliation as soon as possible, he added.

Yang also called for effectively and appropriately resolving differences in a bid to achieve regional peace and stability. The spillover effects of the Libyan conflict should also be eliminated through a comprehensive approach that addresses both symptoms and root causes, he said.

With the efforts of all participants, the Berlin Conference made important achievements with a Conference Conclusions issued, which calls for a ceasefire as soon as possible and stresses that there is a no way out for a military solution in Libya. It also urges parties concerned to implement UN Security Council resolutions and support the UN as a major mediation channel.

Stressing that China always maintains that the Libyan issue can be solved properly only through political approaches, Yang said: "We hope that the political solution for the Libyan issue will usher in a new starting point, and new active development will be made."

China always respects the sovereignty, independence and territorial integrity of Libya, and China supports a Libyan-led and Libyan-owned political process under the aegis of the UN, he said.

During the process, the opinions of Libya's neighboring countries should be heard and fully respected, in a bid to find a solution that can take into account concerns of all parties. In the meantime, the international community should spare no efforts to fight against terrorism together, in a bid to prevent terrorism from becoming stronger in Libya and help the country put an end to the conflict, restore political dialogues and achieve lasting peace.

As a permanent member of the UN Security Council and a responsible country, China has always been supporting and promoting the process for a political solution of the Libyan issue. China firmly supports multilateralism and is committed to addressing regional and international issues through strengthened cooperation, added Yang.

In the next stage, China will continue to work with the international community to make contributions to the restoration of peace and stability in Libya, said Yang.