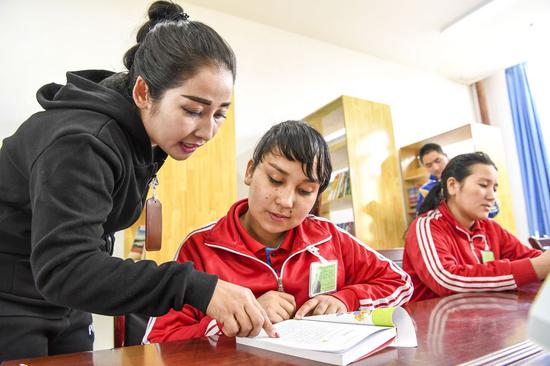 The Committee of Foreign Affairs of the Chinese People's Political Consultative Conference National Committee on Wednesday expressed severe condemnation of, strong indignation over and firm opposition to the passing of a bill on Xinjiang-related issues by the U.S. House of Representatives.

The U.S. House of Representatives passed the so-called "Uyghur Human Rights Policy Act of 2019" on Tuesday local time despite strong opposition from the Chinese side, which has grossly interfered in China's internal affairs and severely violated the basic norms governing international relations, according to a statement issued by the foreign affairs committee.

Identifying Xinjiang as a key battlefield in the fight against terrorism and extremism in China, the statement noted that since the adoption of a series of preventive anti-terrorism and de-radicalization measures in accordance with the law, there have been no violent terrorist attacks in Xinjiang for three consecutive years.

That is China's important contribution to the international counter-terrorism cause, said the statement.

The United States, however, passed the so-called bill to endorse terrorism, which seriously undermines international anti-terrorism cooperation, according to the statement.

It said the preventive counter-terrorism and de-radicalization measures taken by Xinjiang in accordance with the law are aimed at safeguarding the security and human rights of the people of all ethnic groups in Xinjiang.

The United States has turned a blind eye to that, pointing fingers at China while ignoring its racial discrimination situation at home, said the statement, adding that the double-standard bill ignores the facts and distorted truth, which has exposed its intention of undermining stability in Xinjiang and containing China's development under the guise of safeguarding human rights.

The committee said that any such attempt is doomed to fail and urged the U.S. side to immediately stop using Xinjiang-related issues to interfere in China's internal affairs.

It also called on the U.S. side to give priority to safeguarding the overall situation of China-U.S. relations, do more things conducive to mutual trust and cooperation, work with China to strengthen international anti-terrorism cooperation, and safeguard world and regional peace and stability.