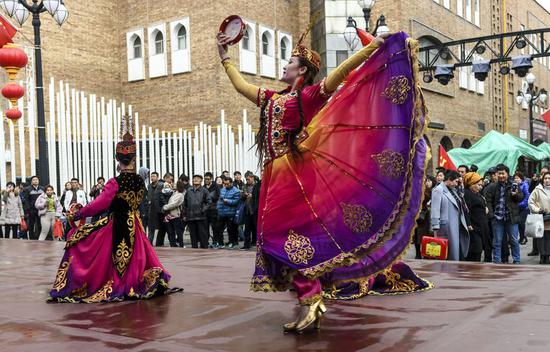 A spokesperson for the government of northwest China's Xinjiang Uygur Autonomous Region on Thursday said the recent hyping of fake news by some foreign media and organizations regarding the so-called "leaked documents" on Xinjiang is in disregard of the facts and absolutely unacceptable.

The spokesperson issued a statement on the regional official Tianshan website refuting recent reports by some foreign media and organizations, in which they hyped the so-called "internal documents" about Xinjiang and slandered anti-terrorism and de-radicalization efforts in the region.

The spokesperson said this kind of disregard for the facts and denigration of the arduous efforts made by people of all ethnic groups in Xinjiang to achieve long-term social stability should never be accepted.

There have been no cases of violence or terrorism in Xinjiang for three years, showing the positive economic development, social stability, national unity and religious harmony in the region, said the spokesperson.

The spokesperson said since the end of last year, more than 1,000 people from over 90 countries and regions had visited the centers, and media from home and abroad have also reported on the reality of the situation.

It has been widely acknowledged that Xinjiang's education and training centers fully conform to the purposes and principles of the United Nations in preventing and combating terrorism and safeguarding basic human rights, and are worthy of full recognition and study, according to the spokesperson.

China is a country under the rule of law and has a complete judicial process, the spokesperson said, adding that the judicial organs of Xinjiang act in strict accordance with laws and regulations. They deal with persons suspected of breaking the law and committing crimes according to the nature and circumstances of their illegal acts.

The Chinese government protects the lawful rights of foreign nationals in China and no people other than Chinese nationals has received training at the centers. The freedoms of communication and privacy of Chinese citizens are protected by law and there is no monitoring or restricting of communications in the region, according to the spokesperson.

Practice has proved that the fight against terrorism in accordance with the law has met the ardent expectations of the people of all ethnic groups in Xinjiang, has strongly safeguarded overall social harmony and stability, and significantly increased the people's sense of gain, happiness and security, according to the spokesperson.

"We will continue to effectively run our own affairs and develop Xinjiang, and will work hard to promote social stability and lasting peace in the region," the spokesperson said.