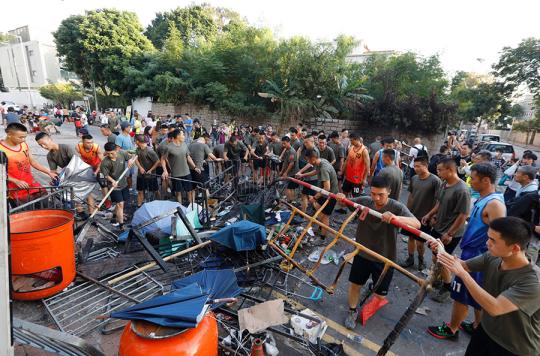 Members of the Hong Kong garrison of the People's Liberation Army on Saturday help clear roads following escalating violence by radical protesters who put up roadblocks and caused major disruptions to residents' lives across the city. (Photo/CHINA DAILY)

Senior Colonel Ren Guoqiang said at a news conference in Beijing that the garrison is always ready to follow orders from the Communist Party of China Central Committee and the Central Military Commission, and is confident it can carry out its missions set by the Basic Law and Garrison Law.

Ren said the Nov 14 remarks made by President Xi Jinping on Hong Kong's recent situation pointed out the direction and path needed to stabilize the special administrative region.

The president made a clear stance on the Hong Kong situation when addressing the BRICS Summit in Brasilia, Brazil. He said that ending violence and chaos and restoring order remain the most urgent tasks for Hong Kong at present.

He said that the radical criminal acts taking place in Hong Kong have grossly trampled the rule of law and social order, seriously harmed the prosperity and stability of the special administrative region and severely challenged the bottom-line of the "one country, two systems" principle.

The Chinese government is firmly resolved to safeguard its sovereignty, security and development interests, implement the principle of "one country, two systems" and oppose any external forces interfering in Hong Kong affairs, Xi said.

Responding to a question on recent moves by troops from the PLA Hong Kong Garrison to assist in clearing refuse from streets near their barracks, Ren said at the Thursday news conference that their acts were voluntary and intended to assist locals and were not in violation of the Garrison Law and the principle of "one country, two systems".

The spokesman said such moves, like planting trees and donating blood, represented the soldiers' love and care for the Hong Kong people.

Speaking of the deployment of China's second aircraft carrier - the first domestically designed - Ren said the new vessel is still undergoing sea trials and its commissioning is contingent upon the results of the trials.

"The deployment of our carriers is determined by the threats on our national security as well as our defense needs," he said.

Observers have speculated that the carrier will soon be delivered to the PLA Navy, which will substantially boost the Navy's long-range operational capability.