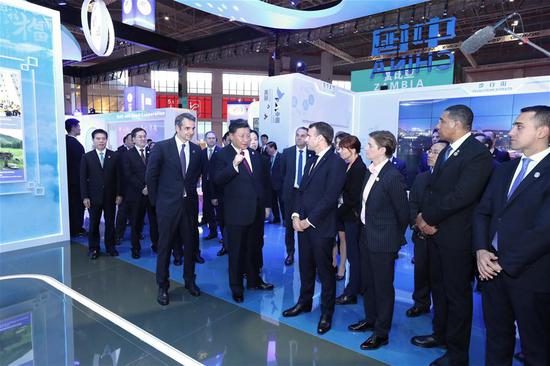 Chinese President Xi Jinping, together with foreign leaders who are attending the second China International Import Expo (CIIE), tour the exhibitions after an opening ceremony of the CIIE in Shanghai, east China, Nov. 5, 2019. (Xinhua/Ju Peng)

Chinese President Xi Jinping, together with foreign leaders who are attending the second China International Import Expo (CIIE), toured the exhibitions after an opening ceremony Tuesday in Shanghai.

Accompanied by French President Emmanuel Macron, Xi visited the French exhibition area and tasted French wine and beef. French entrepreneurs said they are bullish about the Chinese market and hope to further expand exports to China.

The special products from each country have their own competitiveness, Xi said, expressing his hope that all countries attending the expo reinforce the promotion of their products to better meet the Chinese people's aspirations to live a better life.

In front of a countdown screen for winning the country's battle against poverty, Xi said China is ready to share its poverty relief experience with other countries and jointly build a community with a shared future for humanity featuring common development and the elimination of poverty.

Foreign leaders spoke highly of the CIIE, which provides an opportunity for promoting bilateral economic and trade relations. They also expressed their optimism about China's development and the bright prospects of the Belt and Road Initiative, and their hopes to seek common development and prosperity with China.