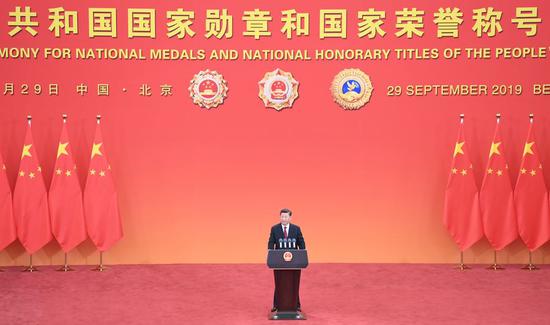 Chinese President Xi Jinping, also general secretary of the Communist Party of China Central Committee and chairman of the Central Military Commission, delivers a speech at the presentation ceremony of the national medals and honorary titles of the People's Republic of China at the Great Hall of the People in Beijing, capital of China, Sept. 29, 2019. (Xinhua/Yin Bogu)

Chinese President Xi Jinping recognized individuals - both Chinese and foreigners - who have contributed to China's development and social progress in a speech delivered on Sunday.

Experts said the ceremony and speech will not only inspire the Chinese people to learn from heros and role models, but enhance the country's friendship with the rest of the world.

Alexander Zelenkov, an Asia expert at the Voice of Russia radio station, said outstanding representatives from various fields in China were awarded national medals and honorary titles, indicating that China attaches great importance to the development and progress of the whole society.

Xi's speech at the presentation ceremony conveyed a simple and correct concept: greatness comes out of the ordinary, he said, adding that this shows that every person who works hard for the happiness of the country and the people in any ordinary post can make great contributions to the country.

The recognition of heroes and role models will help carry forward their deeds and play a positive role in guiding the society and inspiring the Chinese people to strive for national rejuvenation, said Teerati Banterng, a lecturer with the Graduate School of Communication Arts and Management Innovation at the National Institute of Development Administration in Thailand.

Abdul Rahman Al-Najjar, deputy CEO of the SAK Holding Group in Qatar, said Xi's speech will promote the Chinese people's passion for work and respect for heroes, and inspire the Chinese people not to be complacent in the face of the achievements they have made and to continue to contribute to the country's development. 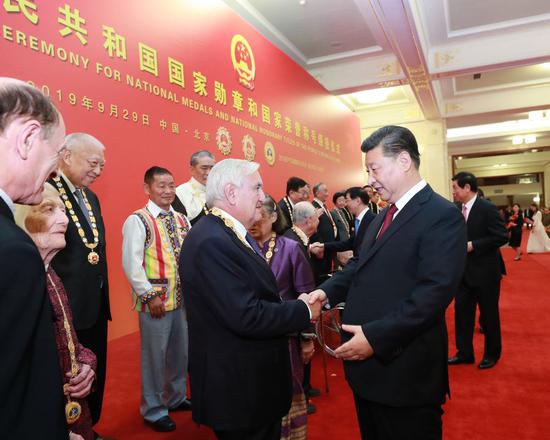 Chinese President Xi Jinping, also general secretary of the Communist Party of China Central Committee and chairman of the Central Military Commission, communicates with Jean-Pierre Raffarin, the honoree of the Friendship Medal, at the Great Hall of the People in Beijing, capital of China, Sept. 29, 2019. (Xinhua/Pang Xinglei)

Mohammed bin Saad Al Muqaddam, a history professor with the Sultan Qaboos University of Oman, said Xi presented national medals and honorary titles, and delivered a speech, which inspire the Chinese people to work for national construction, adding that it also reflects China's aspiration to maintain world peace and promote common development of all countries.

Former Tanzanian Minister for Foreign Affairs and International Cooperation Bernard Membe said it is "a great honor" of former Tanzanian Prime Minister Salim Ahmed Salim, adding that "by giving Salim the Friendship Medal, the people of China have given Tanzania the honor which is beyond words."

Xi said in his speech that the Chinese people are willing to work with people of all countries to build a community with a shared future for humanity and to make the planet a better place.

Fernando Reyes Matta, director of the Center for Latin American Studies on China at Chile's Andres Bello University, said it is a very important concept, and that the people of Latin America and China will better address common challenges in the future.

Echoing Matta's view, Ali Nawaz Gilani, general secretary of the Pakistan-China Friendship Association, said China will win more support and friendship because it is sharing its development and prosperity with the world.