Chinese ambassador: Beijing not to 'sit by and watch' if Hong Kong protests turn into unrest 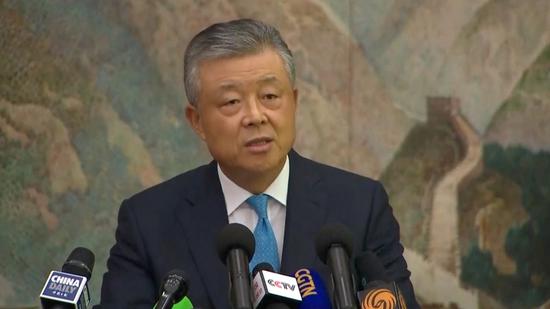 Liu Xiaoming, Chinese ambassador to the UK, speaks at a press conference in London, Aug. 15, 2019. (Photo/CGTN)

China's central government will not "sit by and watch" if the situation in Hong Kong deteriorates and turns into unrest and becomes uncontrollable, said Liu Xiaoming, Chinese ambassador to the UK, on Thursday, adding that Beijing has "enough solutions and power" to put an end of the violence swiftly.

"If the situation deteriorates further into unrest, uncontrollable by the Hong Kong Special Administrative Region (SAR) government, then the central government will not sit by and watch," Liu said during a press conference in London.

Answering questions on whether the central government will send forces to Hong Kong, Liu said he believes the situation in the city is still under the control of the Hong Kong SAR government.

This violent behavior shows early signs of terrorism, Liu noted, adding that offenders involved in these violent acts must be brought to justice.

On Wednesday, Trump tied the ongoing China-U.S. trade talks to a resolution for Hong Kong. He tweeted: "Of course, China wants to make a deal. Let them work humanely with Hong Kong first! I have ZERO doubt that if President Xi wants to quickly and humanely solve the Hong Kong problem, he can do it. Personal meeting?"

Liu said Hong Kong is a constant topic between the two countries and China is open to discussions, but China cannot accept interference as Hong Kong is purely China's domestic matter.

He warned of foreign forces behind the violence in the city. Some foreign organizations have been financially supporting protests, and some foreign officials have been seen meeting radical protesters, and they want to use Hong Kong to prevent China from developing smoothly, the ambassador said.

He urged Western countries to stop interfering in Hong Kong affairs. "It would be lifting the stone and dropping on your own feet," he warned.

On the question of the impact of the situation in Hong Kong on China-UK ties, the ambassador said that some politicians in Britain can't get over the colonial hangover, and they still see Hong Kong as a British colony.

Hong Kong is a part of China, not the UK, the ambassador noted.

The UK has no jurisdiction and power over Hong Kong and the 1984 joint declaration was made to ensure the handover of Hong Kong and a smooth transition later, he said.

The bilateral ties are based on mutual respect on sovereignty and internal affairs, and as long as the UK government follows this principle, the relationship would move along the Golden Era, he said.