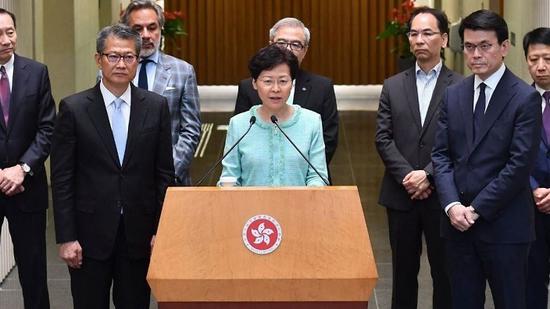 Carrie Lam made another call for calm in a Facebook post, two days after chaos erupted at the Hong Kong International Airport.(Photo/CGTN)

The Chief Executive of the Hong Kong Special Administrative Region, Carrie Lam, has reiterated her call for an end to the chaos in Hong Kong in order to save the deteriorating economic situation.

Hong Kong has been faced with protests for nearly ten weeks now, most of which have escalated to violent situations as demonstrators clashed with security authorities.

“The most important thing is to stop the violence and restore social order in the face of external anxiety. Everyone has been saddened by the recent incidents of violence and vandalism in Hong Kong. I believe that every person who cherishes Hong Kong will not have the heart to see Hong Kong destroyed,” Carrie Lam said on Thursday.

The chief executive of the territory made the call in a Facebook post, two days after chaos erupted at the Hong Kong International Airport as protesters disrupted the facility, forcing the aviation authorities to suspend operations.

During that incident, some police and travelers and a journalist were assaulted by the demonstrators, sparking worldwide condemnation for the violence.

“The current difficulties in Hong Kong require every citizen to cope. Everyone should work hard to get Hong Kong back on track as soon as possible.” Carrie Lam added.