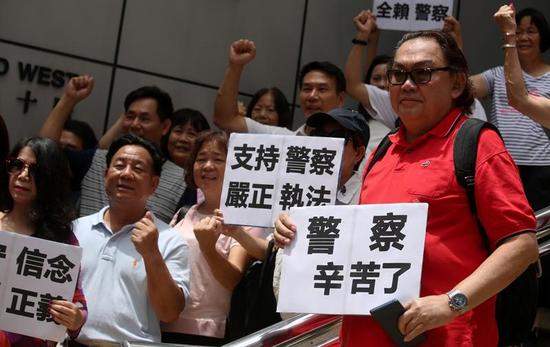 Hong Kong residents stage a rally on July 29, 2019 to show their gratitude towards the police for enforcing law and maintaining order of the city. (PHOTO / CHINA DAILY)

A number of civil groups in China's Hong Kong Special Administrative Region (HKSAR) on Monday showed their support for the police, hoping that they continue to work hard to enforce the law and maintain the order and security of Hong Kong.

"The police have been striving to protect our safety amid the series of violent demonstrations that happened recently in Hong Kong, which is not easy," Hong Kong resident Chow said outside the Western Police Station, where he joined his friends to show support for the police.

"We are here to support the police in strictly enforcing the law, getting rid of bullies and bringing peace to law-abiding people," Chow added.

Jack Shun, a friend of Chow, said that he was very angry about the illegal rallies and protests that took place over the weekend.

"Why did those violent protesters throw bricks to the police? We have had enough! We don't want to see the police get hurt," Shun said indignantly, adding that he wanted to see Hong Kong stay stable and prosperous.

A number of civil groups also gathered at the Hong Kong Police Force headquarters to show their support.

More than 30 members from Defend Hong Kong Campaign rallied in front of the police headquarters, holding national flags and flags of Hong Kong SAR, raising banners and placards with slogans expressing their gratitude and support for the police.

Kenny Po, president of Defend Hong Kong Campaign, told reporters that the police have been doing their utmost in fulfilling their duties in order to maintain social order.

Po praised the police for taking appropriate actions promptly to restore order when facing violence by arresting some violent protesters.

"We will continue to support the police in enforcing the law strictly and arresting those opposition legislators who have been instigating the youth to stage illegal protests and commit violence," Po said.

Retired Hong Kong resident Yiu Wing Wah were among a group of people at the police headquarters, presenting placards with slogans including "well done!", "keep it up!" and "protect Hong Kong" to express support for the police.

"We are here to express our consolation for the police and to show support for them in continuing to enforce the law and maintain the order and security of Hong Kong," Yiu said.

"Our demand is very simple, that is to see stability and prosperity in Hong Kong, and no more damage," the 74-year-old said, adding that the violent protesters blocked the roads and disrupted normal businesses, which not only damaged the rule of law, but also affected Hong Kong's economy.

Meanwhile, some Hong Kong residents also went to the Central Police Station to show their support for the police on Monday.