FM: Asian countries should 'trust each other' 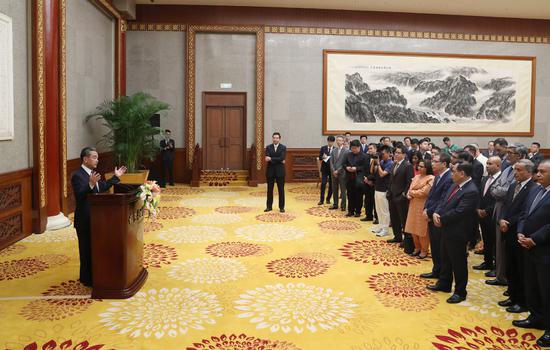 Asian countries should solve their differences with sincerity, and they will find proper solutions to issues by treating each other frankly and conducting friendly consultations, State Councilor and Foreign Minister Wang Yi said in Beijing on Thursday.

Also, Asian countries should promote cooperation through perseverance, and such cooperation should be sustainable and have a long-term perspective, Wang said. "We should stick to pushing ahead our mutually beneficial cooperation, whatever difficulties and setbacks we face," he said at a gathering of Asian diplomats.

Countries are equal regardless of their size, and Asian countries are always neighbors no matter what differences they have, Wang said. "Our relations will be firmly secured as long as we treat each other with heartfelt sincerity and trust each other," he said.

Looking back on the 70 years since the founding of the People's Republic of China, Wang said the Five Principles of Peaceful Coexistence that China initiated together with India and Myanmar in the 1950s served as norms for the complex relations among Asian countries in the aftermath of World War II.

Since reform and opening-up, China has greatly developed friendly cooperation with neighboring countries through its neighborhood diplomacy policies, including fostering an amicable, secure and prosperous neighborhood, Wang said.

This idea, together with Xi's proposal of jointly building an Asian community with a shared future, is a response to the common aspiration of Asian countries and in line with their common interests, Wang said, adding that China hopes to develop closer ties with other Asian countries.