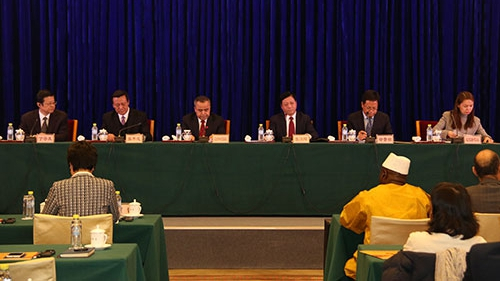 The anti-terrorism and deradicalization efforts in the Chinese region of Xinjiang offer a new method of tackling the global difficult issue of terrorism by addressing both the symptoms and root cause, according to China's Vice Foreign Minister Zhang Hanhui.

He made the remarks at a press briefing held by the foreign ministry on Friday.

Erkin Tuniyaz, vice chairman of the government in the northwest region, gave attendees a comprehensive introduction to the achievements of its economic and social development, as well as preventive anti-terror and deradicalization work.

Diplomats from over 80 countries and international organizations attended the briefing. They said China's explanation helps them to understand Xinjiang objectively.

The measures are not only conducive to stability and development in the area but are also key to the global anti-terror fight, the diplomats said, adding that the experience is worth studying and drawing on.

Vice Foreign Minister Zhang also emphasized that China will continue to make a due contribution to the global anti-terror fight, safeguard world peace and development with other countries, and forge a community with a shared future for mankind.