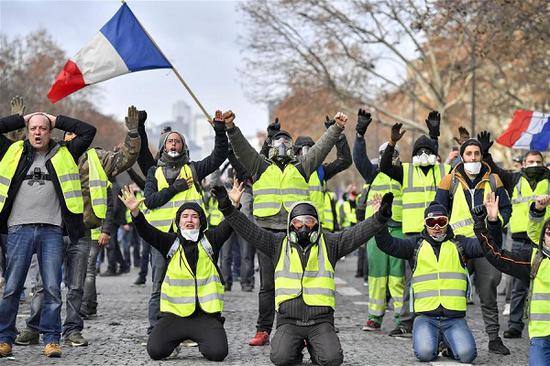 For the 12th straight weekend of protests, thousands of "Yellow Vest" protesters marched in Paris and other French cities on Saturday in relatively calm rallies, but some sporadic incidents led to 30 arrests in the French capital.

As previous demonstrations, discontent people chanted the national anthem and anti-President Emmanuel Macron's leadership slogans. Some of them had put plasters and others wore eye patches to pay tribute to those wounded in the months-long protests.

At the front of the fresh street action, Jerome Rodrigues who lost one of his eyes after being hit by a flash-ball last week, headed the rally in the French capital to say "Stop" to "Violence of State, Macron guilty", as read in some banners.

The French Interior Ministry said Saturday's protests, coordinated via social media against Macron's leadership, drew 58,600 participants nationwide. The turnout was down from a week ago when 69,000 people took part.

After a calm debut where peaceful atmosphere reigned, tension arose in Paris after riot police used tear gas and water cannon in response to some protesters who set bins and a scooter ablaze.

More standoffs were reported as officers moved to disperse protesters in the Republic square where they had planned an evening gathering, dubbed "Yellow Night".

The "Yellow Vest" movement, a nationwide protest against weak economic performance and stagnant income increase, started as a campaign against surge in fuel prices in November 2018.

Since then, thousands of drivers wearing highly visible yellow vests had blocked roads across the country and staged street protests that had been transformed into social rebellion demanding Macron to step down.

Despite capitulating over plans for fuel taxes, France's youngest president in its modern history has struggled to ease the anger that cast doubt on his political credentials to reform one of Europe's major powers and lead the country, according to the country's pollsters.