Russia to suspend INF Treaty after U.S. pulls out 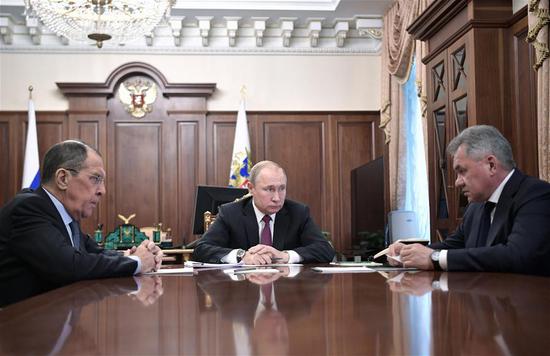 Russian President Vladimir Putin said Saturday that Russia will suspend its participation in the Intermediate-Range Nuclear Forces (INF) Treaty in a mirror response to the United States' decision.

"We will come up with a tit-for-tat response. American partners have announced the suspension of their participation in the treaty, and we are suspending it as well," Putin said at a meeting with Russian Foreign Minister Sergei Lavrov and Defense Minister Sergei Shoigu.

The Trump administration announced Friday that the United States is withdrawing from the INF Treaty with Russia within six months, starting from Feb. 2.

U.S. President Donald Trump said Friday that his country will "move forward with developing our own military response options."

The United States "will work with NATO and our other allies and partners to deny Russia any military advantage from its unlawful conduct," said Trump.

Moscow is concerned over the U.S. military's task to create low-power nuclear munitions and Washington's possible plans to use it on medium-range missiles, Lavrov said Saturday at the meeting with Putin and Shoigu, according to Sputnik.

"We are also concerned about the fact that recently, a year ago, the U.S. 'Nuclear Posture Review' set the task to create low-power nuclear munitions, which will probably be used on medium-range missiles," Lavrov said.

"They announced that they (the United States) are engaged in research and development work, and we will do the same," Putin said.

He also noted that some countries are starting to deploy weapons in space, saying that it is necessary to come up with certain plans to counter this "possible threat."

Despite the retaliatory measures, Russia will not be dragged into an arms race, Putin said.

"I want to draw your attention to the fact that we should not and will not be drawn into an expensive arms race," he told the ministers.

Russia would not deploy medium- and shorter-range missiles in any region as long as the United States avoids doing this in respective regions, he added.

Meanwhile, Putin asked the ministers not to initiate any negotiations on the arms control issue and wait until Washington is ready to engage in dialogue.

"All our proposals, as before, in this area remain on the table. The door for negotiations is open," Putin said. "Let us wait until our partners are ready to conduct an equal, meaningful dialogue with us on this crucial topic -- both for us and for our partners, and for the whole world."

The INF Treaty was signed in 1987 between the Soviet Union and the United States on the elimination of intermediate-range and shorter-range missiles.

Moscow and Washington have been accusing each other of violating the agreement in recent years amid increasing tensions.

In October, U.S. President Donald Trump said Washington would pull out of the INF Treaty on account of Russia's alleged breach of the agreement, a charge which Moscow has repeatedly denied.

Washington's decision to leave the INF Treaty also prompted questions about the fate of the New Strategic Arms Reduction Treaty, which is another disarmament agreement signed by Washington and Moscow in 2010 and will expire in 2021.

Russia had a right to ensure that the United States would guarantee the New START implementation and not to reverse the process by modifying missiles to non-nuclear configuration, Lavrov said Saturday at the meeting with Putin and Shoigu, according to Sputnik.