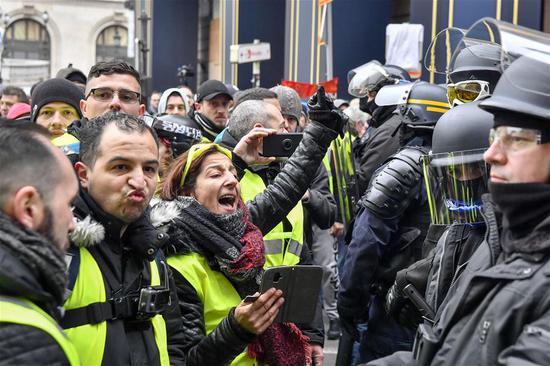 The traditional political establishment in Europe is challenged as never before as the year 2018 draws to an end.

In London, the mess of Brexit deadlocked the Parliament, cast shadows over the political future of Prime Minister Theresa May, and left almost everything hanging in uncertainties.

Across the English channel, French President Emmanuel Macron is now seen as out-of-touch and roiled by the anger of the "yellow vest" protesters for weeks.

In Berlin, Europe's moral compass Angela Merkel resigned as the ruling party chief and has been rendered a lame-duck chancellor.

In each of the leading countries, discontent has been brewing, with rifts in society on migration and livelihoods widening. Across the Atlantic, the leader of Europe's traditional ally has gotten in the face of every one of them -- publicly undermining May, lambasting Merkel and openly tweeting at Macron.

Voters of Italy, another big economy on the continent, shunned traditional politics and propelled to power populists -- the Five Star Movement and the League -- who until recently engaged in a clash with the rest of the eurozone over budget. Rome did not back down until deficit sanctions were threatened by Brussels.

A chilling iceberg of revolt lurks below all the disarrays as the major capitals in Europe have in one way or another fallen into uncharted territory.

The programs and the objectives of the "yellow vests" in France and the Five Star Movement in Italy have many in common, Romano Prodi, a former president of the European Commission and prime minister of Italy, wrote in a recent op-ed in the Il Messaggero newspaper.

Both movements chose objectives that are easily shared by a majority of citizens and that garner popular consensus because of injustices and errors that have accumulated over time.

These mistakes, Prodi wrote, along with unprecedented technological development, have sparked the serious difficulties facing the European leaders.

The Paris versus periphery is the mirror of a widening gap between the haves and the have-nots. The entrenched unemployment and the ever-higher taxes in face of stagnation, on top of regressing benefits and the discomfort brought by inpouring immigrants, were all awaiting ignition by a fuse.

The anger did not just ransack the Champs-Elysees. Long before that, the populists have changed the political landscape of Europe in what experts said would impact politics here profoundly.

The impact has already been felt this year. In Rome, populists in their first year of government went into a two-month budget standoff with the European Commission.

The row was settled only last week after commissioners said the Italian government's most recent set of cutbacks was enough for the country to avoid economic sanctions.

Cui Hongjian, director of the Department of European Studies at the China Institute of International Studies, said it is in this Italian government's populism nature to cater to the voters on spending and make them feel fulfilled.

Riding on anti-immigrant and anti-EU sentiment, the far-right and Eurosceptic party Alternative fuer Deutschland (AfD) became the third largest party in the Bundestag, the German parliament, in 2017.

"Eurosceptism is no longer just about institutions in Brussels, or sovereignty or fiscal union ... How people think about the EU is increasingly being wrapped up with how they think about migration, the refugee crisis and border security," said Professor Matthew Goodwin of the University of Kent in a recent Chatham House talk on national populism.

But populist political forces rose beyond particular issue-driven agendas and now reach a more general repudiation of politics-as-usual in Europe.

Christina Tillmann, director of Future of Democracy, a program of the German think tank Bertelsmann Foundation, said AfD sympathizers were, unlike in the case of populism in the United States, not the "blue-collar whites," "less educated" or "people of low incomes," with about 40 percent of them above the average income and 30 percent belonging to the middle class.

Some of them opted to support AfD not because of its political opinions but rather to punish the mainstream parties' "mediocrity," Tillmann said.

"It was rather about people having more control, about wanting to know outcomes, to feel like they actually have a state that is in control and can manage the situation," she said.

The populists are unapologetically optimistic about their chances in the European Parliament elections next year, with a high-ranking AfD member forecasting "a landslide for the new conservative, Eurosceptic parties."

The Europe of Freedom and Direct Democracy (EFDD), a populist Eurosceptic political group to which AfD belongs, holds 43 seats in the currently 751-seat European Parliament.

The EFDD, which includes Italy's Five Star Movement, will emerge much stronger, said Petr Bystron, a senior AfD lawmaker with the Foreign Affairs Committee of the Bundestag.

Experts have sounded the alarm for such a scenario. Petri Koikkalainen, an associate professor of political science at the University of Lapland in Finland, said a further rise of populist parties in the EU elections may deadlock decision-making.

"The EU could end up in a situation that resembles current U.S. domestic politics. A remarkable increase in the seats for populist, nationalistic parties in the May 2019 election could bring bloc politics that would make wide-based cooperation difficult," he said.

"European idealism and positive steps have been largely attributed to the cooperation of Christian democratic and social democratic parties," Koikkalainen said.

The Eurosceptics are currently split into three factions in the European Parliament: the EFDD, the Europe of Nations and Freedom (ENF) and the European Conservatives and Reformists (ECR).

"We hope to combine as many of these parties as possible into a strong, conservative, Eurosceptic group that will be able to exert real power in Brussels," Bystron said.

Koikkalainen, who does not believe that the populist parties could create enough cohesion among them, said that beyond their joint opposition to immigration, there are wide differences among the populist groupings.

"Populists, whether right- or left-leaning, are likely to try to affect EU decision-making internally, toward giving more space to member states," he said.