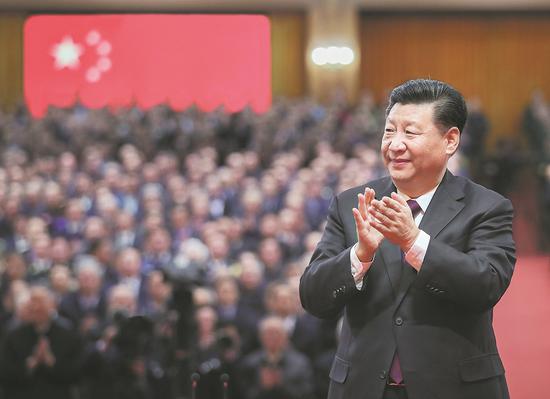 Analysts hail Xi's speech on reform, opening-up By Dong Leshuo,Zhao Huanxin | China Daily | Updated: 2018-12-20 04:35 President Xi Jinping attends a grand gathering celebrating the 40th anniversary of the country’s reform and opening-up at the Great Hall of the People in Beijing on Tuesday. (Photo/Xinhua)

President Xi Jinping's speech on Tuesday to mark the 40th anniversary of China's reform and opening-up provided a nod toward 40 years of incredible achievements while offering policy continuity in the pursuit of future reform, according to experts.

"The practice of reform and opening-up over the past 40 years has shown that openness brings progress, while seclusion leads to backwardness," Xi said, while pledging to support the building of an open, transparent, inclusive and nondiscriminatory multilateral trading system.

Jon Taylor, an American professor of political science of the University of St. Thomas in Houston, said Xi underscored the critical role that the Communist Party of China has played and continues to play in fostering China's development.

"I am particularly encouraged by the fact that Xi's speech sent a strong message of continuity," Taylor said, adding that the Party's success is due to its ability to adapt and change is a message that will resonate well beyond this speech — and provide a reminder that China's model of development remains a viable alternative to Western development models.

Gene M. Burke, vice president and general counsel at J&C International Group, said Xi's speech was very effective at showing how the Chinese people and the ruling political party worked together to bring China into the modern age.

"Overall, President Xi's speech captured exactly what so many Americans think of China. We share the pride and amazement at the huge strides and accomplishments that China has made in a mere 40 years," he said, adding that it set a good tone for future growth and for continued good relations between China and the US.

Chris Rowley, professor of Kellogg College, University of Oxford in Britain, said Xi's speech can be interpreted as the continuation of a long line of grand proclamations in recent years concerning China's economic development, its well-known achievements in sectors including poverty alleviation, healthcare and social security, and the country's role in world affairs and globalization in fight against protectionism.

J. Stapleton Roy, the United States' top diplomat in China from 1991 to 1995, said China's progress in the past 40 years, especially the modernization of the country, has been "breathtaking".

"More than 100 million Chinese leave the country every year and come back … all of these things did not exist during the 1970s and the early part of the 1980s," he said. "China was changing in a very important way. But we make a mistake when we try to assume that there is a quick jump from here to there."

Dr. Klaus Ebermann, a former European Union ambassador to China and a German national, told China Daily: "It (the past 40 years) has been a tremendous development. China has always impressed me by having a long-term view and perspective. A lot has been achieved, and China is on track. This 40 years of development is indication for the decades to come."

Cavince Adhere, a Kenya-based scholar on China-Africa relationship, said there is no doubt that China has emerged as a major development partner for Africa. Contrary to the recently launched US-Africa Policy, President Xi struck a more collaborative and persuasive tone in its international engagements.

"China offers many lessons for Africa's development agenda. Beijing's legendary poverty reduction and social safety net that has seen China lift more than 740 million people out of extreme poverty is an enviable example that Africa should emulate," he said.

"As a leading economy in the world, China's presence can't be wished away. It however behooves Beijing to approach international politics in manner that safeguards the very tents that has facilitated its peaceful rise."