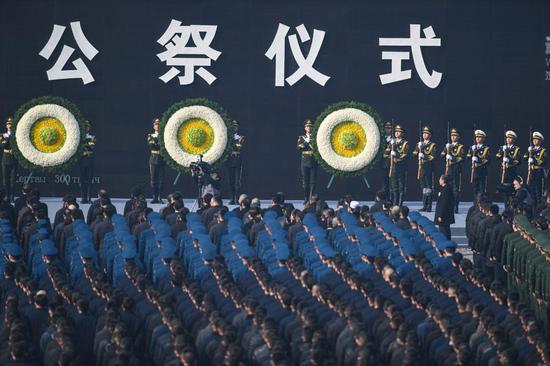 The State ceremony for the National Memorial Day for Nanjing Massacre Victims is held at the memorial hall for the massacre victims in Nanjing, Jiangsu province, Dec 13, 2018. [Photo/Xinhua]

China held the state memorial ceremony on Thursday to mark the 81st anniversary of the Nanjing Massacre in the square of the Memorial Hall of the Victims in Nanjing Massacre by Japanese Invaders in the city of Nanjing in eastern Jiangsu Province.

The ceremony commenced at 10:00 a.m. with all attendees from all walks of life paying silent tribute during a minute-long air raid siren. Trains, ships and cars in the city also whistled and sounded their horns. Eight wreaths were then laid in front of a wall containing the names of the massacre victims.

Wang Chen, a member of the Political Bureau of the Central Committee of the Communist Party of China gave a brief speech to commemorate victims of war and call on all Chinese not to forget the past and to cherish peace.

Foreign friends who offered humanitarian assistance during Nanjing Massacre and war, will be forever remembered by Chinese people, he added.

As this year marks the 40th anniversary of China-Japan Treaty for Peace and Friendship, Wang pointed out the two sides should take into consideration the fundamental interests of their people and make new contributions to world peace.

Peace is an eternal aspiration of humanity, he stressed and added China is committed to the worlds' peaceful development

Following his speech, young people recited Ode to Peace and the Bell of Peace on the site was rung in remembrance of the tragedy.

As a flagrant violation of international laws, the atrocity was tried by the International Military Tribunal for the Far East and the Nanjing War Crimes Tribunal, which rendered a verdict based on irrefutable evidence.

The first state commemoration for the National Memorial Day was held on December 13, 2014.