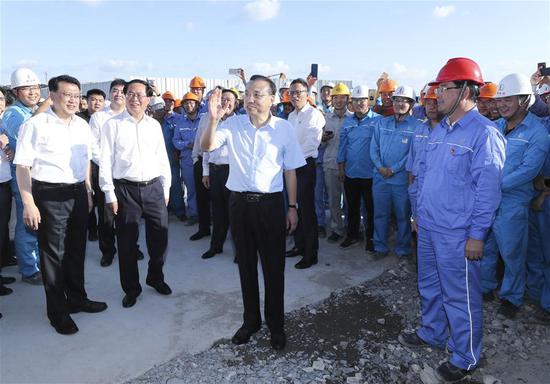 Chinese Premier Li Keqiang, also a member of the Standing Committee of the Political Bureau of the Communist Party of China Central Committee, inspects a privately-owned world-class petrochemical project in east China's Zhejiang Province, Sept. 27, 2018. Li made a research trip from Sept. 27 to 28 in Zhejiang Province. (Xinhua/Pang Xinglei)

Chinese Premier Li Keqiang has called for greater efforts in deepening reform and opening-up, as well as unleashing market vitality in pushing the country's high-quality development.

Li, also a member of the Standing Committee of the Political Bureau of the Communist Party of China Central Committee, made the remarks during a research trip from Thursday to Friday in east China's Zhejiang Province.

During his stop at a pilot free trade zone in the city of Zhoushan, the premier urged deepening reforms to streamline government administration, delegating powers, improving regulation, and strengthening services to provide businesses and people with more convenience.

While visiting a privately-owned world-class petrochemical project, the premier stressed lowering entry barriers to major projects for private enterprises and offering them favorable policies and measures to strengthen their confidence in development.

In his visit to a sewing-machine producer in the city of Taizhou, Li recognized the firm as an example of upgrading traditional industries toward smart manufacturing.

He called for the cultivation of "hidden champions," which refer to relatively small but highly successful companies, by relying on innovation and quality upgrading, and stressed gaining new competitive strength through technological advances.

Noting the current downward pressure on the Chinese economy, Li said that all regions and all government departments should attach greater importance to stabilizing employment, and called for stabilizing economic fundamentals and fostering new growth drivers to keep employment stable.

Li convened and presided over a symposium attended by representatives from state-owned, private and foreign-invested companies as well as financial institutions, addressing concerns over issues including the rise of financing costs.

"Amid challenges arising from changes in the international environment and opportunities from the new technological revolution, we need to do more to heed the voice of market entities and help enterprises in resolving difficult situations," Li said.

"We are confident and capable of tackling the challenges and maintaining sustained and steady development of our economy. China owns a huge market and a vast potential of human resources."

The premier called on support for all enterprises in development regardless of ownership and greater efforts in improving the business environment, slashing taxes and fees, and lowering corporate costs in financing and logistics.