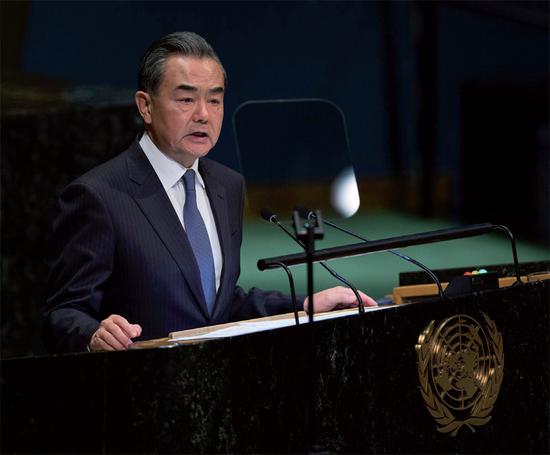 Entity will help facilitate payments for imports, exports including oil

A legal entity will be set up within the European Union to facilitate legitimate financial transactions with Iran in an effort to save the 2015 nuclear deal after the United States withdrew from it and reimposed sanctions on Iran.

Foreign ministers from China, Britain, France, Germany, Russia, and Iran said in a joint statement on Monday that a newly established "Special Purpose Vehicle" will help to facilitate payments for Iranian imports and exports including oil.

"The participants welcomed practical proposals to maintain and develop payment channels, notably the initiative to establish a special-purpose vehicle to facilitate payments related to Iran's exports, including oil, and imports, which will assist and reassure economic operators pursuing legitimate business with Iran," reads the joint statement of the foreign ministers.

Chinese Foreign Minister Wang Yi said after the meeting that all the parties concerned must safeguard the effectiveness of the 2015 deal, maintain normal economic and trade cooperation with Iran, and promote regional peace and stability.

He said China supports anything that is conducive to maintaining a comprehensive agreement.

The nuclear agreement signed in 2015 is meant to prevent Iran from developing nuclear weapons, but in May President Donald Trump announced the US' withdrawal and has reimposed sanctions on Iranian trade in automobiles and metals, including gold.

The SPV idea came shortly before another round of US sanctions on Iran, which are poised to resume in November targeting Iran's oil.

Federica Mogherini, foreign policy chief of the EU, said after the closed-door ministerial meeting that the legal entity will allow European companies to continue to trade with Iran in accordance with the EU law and could be open to other partners in the world.

The agreement follows extensive exchanges and announced that a meeting of technical experts will be held to "operationalize" the new financial facility, Mogherini said.

These initiatives are aimed at preserving the Iran nuclear deal, which is in the interests of the international community, according to a joint statement of the foreign ministers, the English version of which was read out to reporters by Mogherini.

According to the statement, the participants recognized that alongside implementation by Iran of its nuclear-related commitments, the lifting of sanctions, including the economic dividends arising from it, constitutes an essential part of the Joint Comprehensive Plan of Action, also known as the JCPOA.

The joint statement said the six countries that signed the 2015 nuclear agreement "reconfirmed their commitment to its full and effective implementation in good faith and in a constructive atmosphere", and called the agreement "a key element of the global non-proliferation architecture and a significant achievement of multilateral diplomacy".

Participants underlined their determination to protect the freedom of their economic operators to pursue legitimate business with Iran, in full accordance with the Security Council resolution.

The five remaining powers of the agreement gathered in New York with Iran and the EU to discuss future trade with Teheran prior to the United Nations' General Debate scheduled on Tuesday.

Meanwhile, Iranian leader Hassan Rouhani said he will not be meeting Trump, although both are set to attend the UN meetings this week.