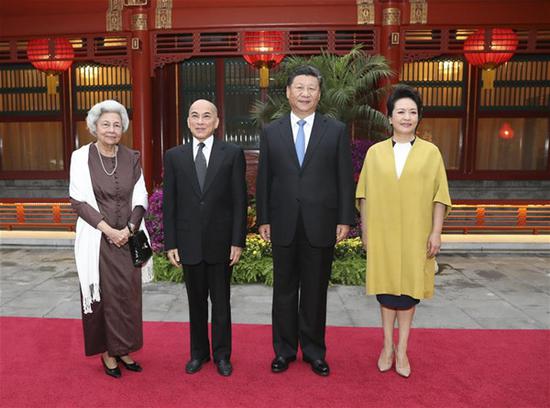 Wishing the King and the Queen Mother a happy festival and good health, Xi said the close and special relationship between China and Cambodia is characterized by deep historical feelings.

Since the two countries established diplomatic ties 60 years ago, the China-Cambodia friendship, which was forged and cultivated by Chinese leaders of the older generation and Cambodian King Father Norodom Sihanouk, is growing more and more vibrant.

"From 2016 until now, I have met with King Sihamoni and Queen Mother Monineath every year, just like gatherings between family members," Xi said, adding that he and King Sihamoni have reached important consensus on inheriting and carrying forward the traditional friendship, leading the bilateral relationship to the best-ever period in history.

Xi called for frequent interactions between the two nations at a high official level as well as among the people "like close relatives."

Congratulating the successful general election in Cambodia, Xi expressed his wish that the Southeast Asian country win new and greater achievements in its national development.

Xi said China attaches great importance to its ties with Cambodia and will work together with the Cambodian side to carry forward the traditional friendship and step up the comprehensive strategic cooperative partnership continuously.

Expressing their gratitude for Xi and Peng, King Sihamoni and Queen Mother Monineath said it feels like meeting family members every time they see President Xi and Professor Peng.

The Cambodian people are grateful for China's firm and long-lasting support and assistance as well as President Xi's great attention to the development of the Cambodia-China ties, said King Sihamoni and Queen Mother Monineath.