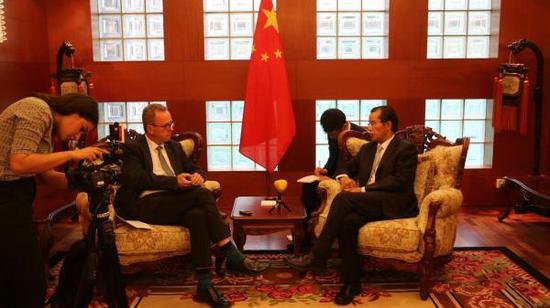 "The head of the local police station met with my colleagues at this noon," the ambassador told Aftonbladet on Monday. "The police chief confirmed that the three tourists didn't break the Swedish laws, but also said the policemen didn't break the laws either. We can barely understand the statement."

Chinese man surnamed Zeng and his parents were reportedly thrown out of a hotel by local policemen and were taken to a cemetery in Stockholm on September 2.

"The trio had been brutally treated; their life, security and dignity had been threatened and hurt," Gui said, asking if the Swedish laws and government are "disrespectful" to human rights and honor.

"We again urge Sweden to take China's concerns seriously, and to take practical measures to protect the security and legitimate interests of Chinese tourists," said Geng Shuang, a foreign ministry spokesman, on Monday.

Swedish prosecutor Mats Ericsson told the Aftonbladet that "We made the assessment that no crime on the part of the police had been committed," so no preliminary investigation had been initiated.

A manager at the hotel told the newspaper that the Chinese tourists had arrived the day before their booking and were refusing to leave. He said staff called police sometime after midnight, after the family began to make verbal threats.

Zeng told China Daily that the early arrival was not their intention, but a mistake. He "accidentally" found they booked the hotel for a wrong date.

"I didn't mean to cause trouble abroad. The accusation is not reasonable," he said to China Daily, in a response to the uproar on social media.