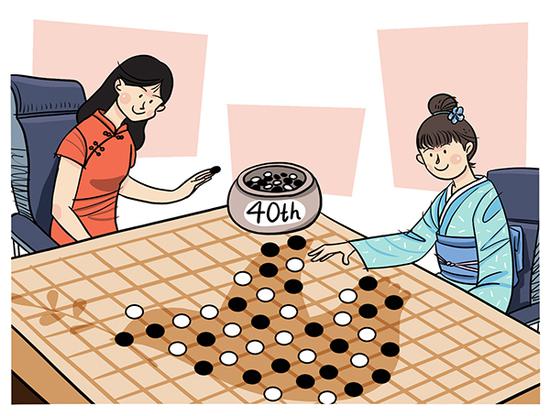 Japanese political heavyweights have been visiting Beijing of late to lay the groundwork for Shinzo Abe's first official trip to China during his second term as Japan's prime minister.

Toshihiro Nikai, secretary-general of Abe's ruling Liberal Democratic Party, paid a visit to Beijing on Aug 29. Vice-President Wang Qishan told the LDP's No. 2 leader that China was ready to work with Japan to inject more positive energy into bilateral relations.

After his trip to Beijing late last month, Japanese Vice-Foreign Minister Takeo Akiba said he had made arrangements with Chinese officials "in an active manner" for Abe's visit to China.

And Japanese Finance Minister Taro Aso, who was in Beijing on Aug 31 to attend a financial dialogue with his Chinese counterpart, said Tokyo and Beijing are making efforts to "achieve tangible results" for a possible summit between Abe and President Xi Jinping.

The next Japanese leader to visit China was Natsuo Yamaguchi, leader of Komeito, the coalition partner of the ruling Liberal Democratic Party. Carrying Abe's letter to Xi, Yamaguchi, who visited Beijing on Sept 5-9, said he wants to work to develop Japan-China ties into an eternal friendship. The important goal for now, he added, is to enable Japanese and Chinese leaders to visit each other's country.

During Premier Li Keqiang's visit to Japan in May, Beijing and Tokyo agreed to resume reciprocal visits by their leaders. China-Japan relations have been improving this year, which marks the 40th anniversary of the signing of the treaty of peace and friendship. And on Aug 12, Li and Abe exchanged congratulatory messages to mark the occasion.

Li said the two countries are on track to further relations while expressing a desire to "promote lasting, sound and stable relations". Abe, on his part, said he is "very pleased" to see bilateral relations returning to the normal path.

And Makoto Nishida, secretary-general of Komeito in the upper house of parliament, said the two countries are on the same page when it comes to shifting bilateral ties in a positive direction.

Probably, Abe's China visit will start on Oct 23, the day the China-Japan Peace and Friendship Treaty went into effect in 1978. But a major premise for Abe's visit to China is that he must win a third term as LDP's president on Sept 20 to remain Japan's prime minister. Abe has a tough fight ahead, though, as former LDP Secretary General Shigeru Ishiba is contesting the election against him.

China and Japan are expected to hold a forum in Beijing later this month, where officials and businesses from both sides will deliberate what infrastructure projects they can join hands to develop under the framework of the China-proposed Belt and Road Initiative.

During Abe's expected China visit, the two countries are likely to announce an outline for cooperation on the initiative, which would be part of the "practical cooperation" they are exploring.

Japanese companies see opportunities in the Belt and Road Initiative. And if Japan joins the initiative, trillions of dollars' worth of roads, railways, ports and power stations needed in countries across Asia, Africa and Europe could be built to add the much-needed vitality to Abe's economic policy, which seems to be running out of steam.

Abe is expected to send his national security adviser Shotaro Yachi to Beijing late this month. He may meet with Chinese diplomats to finalize the details of Abe's China visit and the topics to be discussed at a possible Xi-Abe summit.

Actually, Xi and Abe met on the sidelines of the Eastern Economic Forum in Vladivostok, Russia, on Sept 12, where they had a short conversation.

All in all, the momentum for the development of Sino-Japanese relations appears good. And it is important that the two countries keep moving bilateral ties forward, because a stable, forward-looking relationship will enable China and Japan to work together to address regional and global issues.