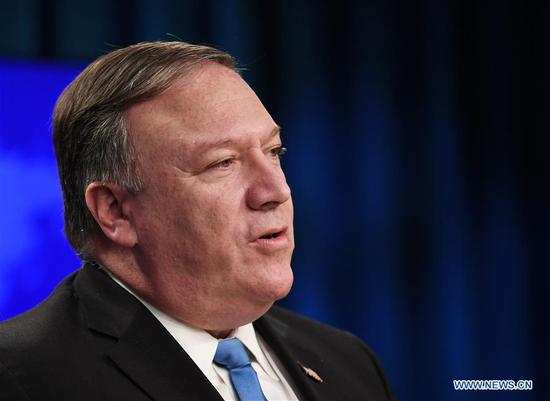 U.S. Secretary of State Mike Pompeo speaks during a press briefing in Washington D.C., the United States, Aug. 16, 2018. U.S. State Department on Thursday announced the creation of the Iran Action Group (IAG) to execute the administration's Iran strategy and pressure the country to change its behaviors. (Xinhua/Liu Jie)

U.S. State Department on Thursday announced the creation of the Iran Action Group (IAG) to execute the administration's Iran strategy and pressure the country to change its behaviors.

Secretary of State Mike Pompeo said the group will be responsible for directing, reviewing, and coordinating "all aspects of the State Department's Iran-related activity, and it will report directly to me."

Saying that Tehran has been engaged in "a torrent of violent and destabilizing behavior" against the United States and its allies for nearly 40 years, Pompeo said, "We are committed to a whole-of-government effort to change the Iranian regime's behavior."

The IAG will ensure that the Department of State remains closely synchronized with interagency partners, and lead U.S. diplomatic efforts to "galvanize international support for our efforts."

Brian Hook, the current director of Policy Planning in the State Department, will lead the group with the formal title of Special Representative for Iran.

Washington left the Iran nuke deal on May 8, saying it would re-impose sanctions on Iran that had been lifted under the deal.

Pompeo, on May 21, rolled out U.S. new strategy on Iran, outlining 12-point requirements for Iran to change its behaviors.

The U.S. government on Aug. 7 re-imposed sanctions on Iran on non-energy areas, and will slap the remaining sanctions on Nov. 5 that concentrate on such areas as energy, shipping and ports.

For its part, Tehran has said that the U.S. side is unreliable and it will not talk with Washington.