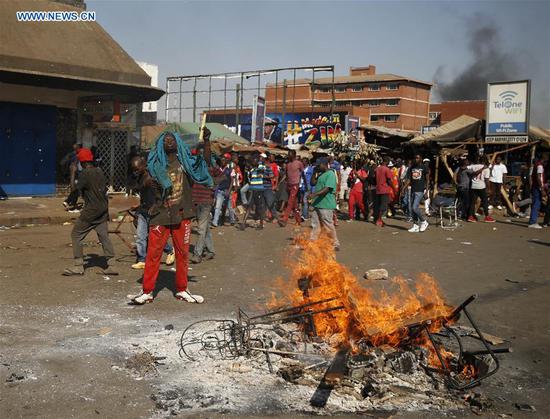 Supporters of the opposition MDC Alliance attend a protest in Harare, Zimbabwe, Aug. 1, 2018. Three people died and scores of others were injured Wednesday when protesting opposition supporters clashed with army and police in the capital Harare. (Xinhua/Shaun Jusa)

Three people died and scores of others were injured Wednesday when protesting opposition supporters clashed with army and police in the capital Harare.

She warned leaders of the opposition MDC Alliance against inciting its supporters to engage in violent activities.

Scores of opposition supporters took to the streets of Harare to protest against the delay in announcement of presidential election results as well as alleged rigging of the vote.

"The police condemns in the strongest terms acts of vandalism and hooliganism that occurred in Harare. As investigations continue, we urge members of the public to remain calm and peaceful and not to be persuaded or coerced into engaging in acts of violence," Charamba said.

She said police were keen to interview leaders of the MDC Alliance in connection with the deadly protests.

President Emmerson Mnangagwa, meanwhile, called on Zimbabweans to remain calm and peaceful as the nation awaits announcement of all election results.

He blamed the MDC Alliance leadership for causing the protests.

"The incidents of violence and hooliganism which broke out in the afternoon came as a complete surprise," he said.

Nkululeko Sibanda, the spokesperson of the MDC Alliance president Nelson Chamisa said the party regretted the deaths during the protests and criticized the security forces for using excessive force to quell the protests.

Chamisa claimed Tuesday that he had won the presidential poll and said his party will not accept a result to the contrary.

The Zimbabwe Electoral Commission has said results for the presidential poll are expected by Aug.4.

According to the results declared by ZEC, the ruling ZANU-PF party won a parliamentary majority in the Monday elections.