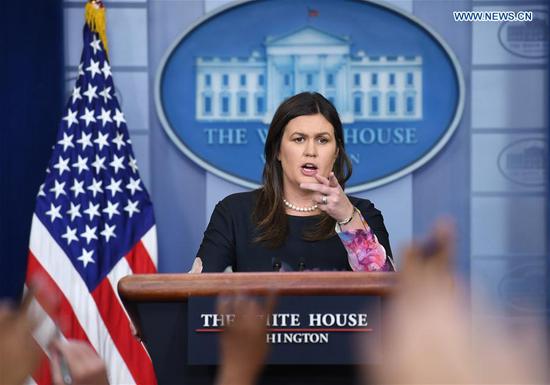 The response came hours after Trump said in a tweet that Sessions should stop the probe led by special counsel Robert Mueller, marking an escalation of his attacks against the wide-ranging inquiry and raising speculation about his intention.

"It's not an order. It's the President's opinion." Sanders told a White House briefing Wednesday afternoon. "The President wants to - has watched this process play out. But he also wants to see it come to an end as he stated many times."

Trump's tweet is viewed as the most direct call that demands Sessions intervene to end the probe, which critics say amounts to an attempt to obstruct justice, a claim that Sanders rejected.

Sessions infuriated the president by recusing himself from the Russia investigation last March before Mueller was appointed by Deputy Attorney General Rod Rosenstein, who's overseeing the inquiry and has defended the special counsel.

Asked whether Trump is aware that Sessions can't stop the investigation, Sanders said, "The President's very well aware of how the process works, once again, he's stating his opinion."

Mueller is looking into the alleged Russian interference in the 2016 U.S. presidential election and any potential collusion between the Trump campaign and Moscow, among other matters that may arise from the investigation.

Since beginning leading the probe from May 2017, Mueller has indicted or secured guilty pleas from 32 people, including several former Trump campaign aides.

Former Trump campaign chair Paul Manafort, who was indicted by Mueller last fall, is facing trial for bank and tax fraud in federal court in state of Virginia.

Legal analysts say Mueller's primary aim in charging Manafort is to put pressure on him so that he would provide information about alleged Russian collusion with the Trump campaign.

Reacting to the tweet about Sessions, Trump's attorney Rudy Giuliani said the president said "should," not "must" when talking about ending the Mueller investigation, and "no presidential order was issued or will be."

The New York Times reported last month that Mueller is also investigating Trump's tweets criticizing Sessions as to whether the president has obstructed justice.

Adam Schiff, the top Democrat on the House Intelligence Committee, blasted Trump's tweets as "an attempt to obstruct justice hiding in plain sight."

In other tweets, Trump repeated his attacks against the probe on Wednesday by calling it "a hoax," claiming that Mueller is "totally conflicted" and what' s his team is doing is "a disgrace" to the country.

As the Russia probe continues, Trump and his political allies have ratcheted up pressure on Mueller and his team in recent months.

Giuliani made headlines on Monday by saying that "collusion is not a crime," a claim reiterated by Trump a day later.