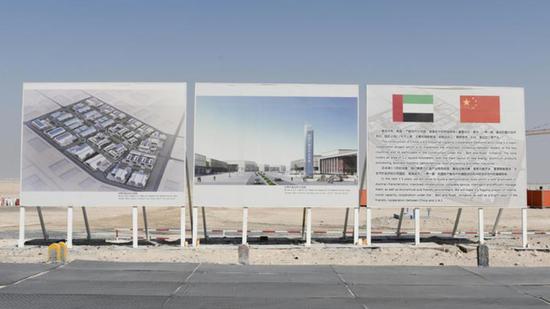 Editor’s note: Wang Jin is a research fellow of the Charhar Institute and Syria Research Center from Northwest University in China. The article reflects the author’s opinions, and not necessarily the views of CGTN.

Chinese President Xi Jinping will start his visit to the United Arab Emirates on July 19, which marks a significant milestone in the two states’ bilateral ties. The UAE is Xi’s first visit to a foreign country in 2018.

Xi’s visit will encourage cultural bonds as well as strengthen political and economic ties between China and the UAE, and will mark a new beginning for bilateral relations under the Belt and Road Initiative.

On the eve of his visit, Xi wrote in an article in leading UAE newspapers that he looks forward to building a China-UAE community of shared future through cooperation on the initiative.

Although China and the UAE established diplomatic relations in 1984, the friendship between the peoples of those countries could be traced back to more than 2000 years ago, when Chinese envoy Ban Chao and his assistant Gan Ying, sent by the Chinese emperor, arrived at the Gulf and established a channel between the Chinese and the Arab world.

With economic development and greater communication, Chinese silk, porcelain, and other products were transported through land and sea to the Arabian Peninsula, East Africa and Europe, while the ancient Silk Road became an important symbol of the relations between those from the Chinese and Arab worlds.

Nearly three-and-a-half decades since bilateral ties were formally established, the relations between the two states have deepened with the growing importance of both China and the UAE in not only Asia but also the world.

The trade volume between China and the UAE reached 52 billion US dollars last year, making China one of the UAE’s top trading partners. Chinese energy companies were awarded by the UAE to stakes in offshore oil concessions in 2017 and 2018, while China-UAE Industrial Capacity Cooperation Demonstration Zone located in Khalifa Industrial Zone has become an example for Chinese investment in the Arab world.

Financially, the UAE has become an important clearing center for the Chinese renminbi (RMB) in the Middle East, with the central banks in both countries signing their currency swap agreement to expand the RMB Qualified Foreign Institutional Investors (RQFII) pilot area to the UAE.

Meanwhile, the UAE has become one of the favorite tourism destinations for the Chinese. To facilitate and encourage the people-to-people exchange, China granted “visa-free” status to UAE citizens in 2017, and the UAE became the first Middle Eastern state to enjoy such an arrangement in China.

The bilateral ties have established a good example for international relations, while the two sides believe that economic development based on shared principles of mutual benefit and respect is the key to regional and international stability and development.

As a state with unique geographic importance connecting the East and the West, and as a member state of the Asian Infrastructure Investment Bank and the first Gulf country to establish a strategic partnership with China, the UAE will continue to serve as a critical hub for China’s Belt and Road Initiative.

President Xi’s visit to the UAE will not only encourage political trust and economic cooperation between the two states but also enhance the friendship between the Chinese and Arab peoples.