Trump says not to lift sanctions on Russia, no 'time limit' on DPRK dialogue 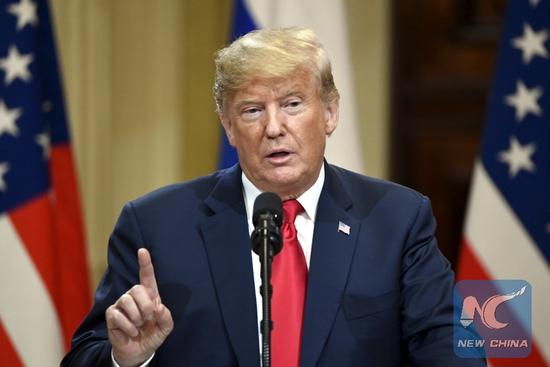 U.S. President DonaldTrump speaks during a joint press conference with Russian President Vladimir Putin (not in the picture) in Helsinki, Finland, on July 16, 2018. (Xinhua/Lehtikuva/Antti Aimo-Koivisto)

U.S. President Donald Trump said here on Tuesday that he will not lift the existing sanctions on Russia, and that there is no "time limit" concerning the U.S. dialogue with the Democratic People's Republic of Korea (DPRK).

While meeting with members of Congress at the White House, Trump rejected the possibility of rolling back U.S. sanctions on Russia despite his meeting with Russian President Vladimir Putin on Monday in Finland's Helsinki.

He also said that he and Putin had talked about a wide range of issues such as Syria, Iran, Israel, and the reduction of nuclear weapons throughout the world.

"A major topic of discussion was North Korea and the need for it to remove its nuclear weapons. Russia has assured us of its support. President Putin said he agrees with me 100 percent, and they'll do whatever they have to do to try and make it happen," said Trump.

The U.S. president added that "discussions are ongoing and they're going very, very well. We have no rush for speed."

"We have no time limit. We have no speed limit. We have -- we're just going through the process. But the relationships are very good. President Putin is going to be involved in the sense that he is with us. He would like to see that happen," he said.

The Kremlin has not yet confirmed his statement.

Blistered by bipartisan condemnation of his reconciliatory tone in the Monday press conference with Putin that many have seen as a signal to publicly side with Putin in attacking U.S. intelligence community, Trump on Tuesday tried to "clarify" his statements, saying that he has "the full faith and support for America's intelligence agencies."

U.S. media reported earlier on Tuesday that the Trump administration was adopting "damage control" steps to clean up the "mess" of the Helsinki meeting.

Senior administration officials were quoted as saying that they wanted Trump to say clearly that he believes U.S. intelligence over Putin and that there will not be any effort by the U.S. to cooperate with Russia on the ongoing probe of Moscow's alleged meddling in U.S. elections.