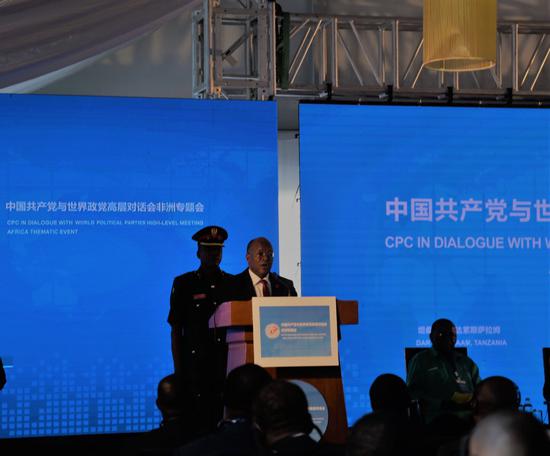 The Communist Party of China (CPC) on Tuesday started off a two-day conference with Africa's influential political parties in Dar es Salaam, Tanzania, aimed at deepening discussion and exchange on governance philosophy and development.

The CPC brought together more than 40 political parties from over 36 countries.

The event, themed "Theories and Practices of Chinese and African Political Parties in Exploring Development Paths Suitable to National Situations", was held outside China for the first time.

Tanzanian President John Magufuli, in opening the conference, thanked China for having the dialogue, terming it a path toward peace, security and economic growth in Africa.

"Political parties play a critical role in economic development of any country. They are the voices of the citizens. I'm confident that the outcomes of the conference will not only enhance the relationship between African countries' political parties and the CPC but will also see deliberations on how Africa can attain sustainable economic growth," he said.

The president said Africa will achieve more economic growth when nations opt to work together.

Song Tao, the minister of the International Department of the Central Committee of the CPC, said that the meeting with African political parties was by no means a move to "export" the Chinese model.

"As was pointed out by CPC General Secretary, Xi Jinping, the key to the choice of path lies in the compatibility with specific national conditions. Since the socialist path with Chinese characteristics is based on China's basic realities, rooted in China's 5,000 years of civilization, grown out of the summarization of experience in 170-plus years of modern China and nearly 70 years of New China, and tested in the 40 years practice of reform and opening-up, it can effectively address China's problems of historic magnitude," Song said.

He said the path was discovered by the CPC and Chinese people of all ethnic groups at a multitude of costs and through the fair sharing of hardships and difficulties.

"Our experience makes it clear that only the people can set the course of a country's development, in accordance with, not detached from, the historical and cultural tradition and political, economic and social development level," he said.

As representatives from the CPC, from political parties of nearly 40 African countries and from the Council of African Political Parties gathered in Dar es Salaam, Song said it was an indication of setting a precedent in the history of exchanges and cooperation between the CPC and African political parties.

"I hope that every one of you could seize this invaluable opportunity to share your insight on the theme of this event in our search for solutions to development path suited to specific national conditions," he said. "This is in addition to building consensus on forging a community with a shared future for China and Africa, and to make an intellectual contribution to the lofty cause of peace and development of mankind."

The fact that the event was held several weeks before the Forum on China-Africa Cooperation (FOCAC), the Tanzanian president said he hoped some of its outcomes will feature at the summit, to be held in Beijing in September.

"FOCAC has been a good platform for Africa to dialogue with China. Since its launch, a lot of achievements have been realized. The trade between China and Africa, for instance, has grown from $10 billion to over $250 billion, making China the biggest Africa trading partner," he said.

He said there are many areas where China can enhance partnership with Africa, including science and technology, increasing investment in Africa, especially in agriculture, industry and mining, and increasing China's imports from Africa, such as coffee, tea and cotton.