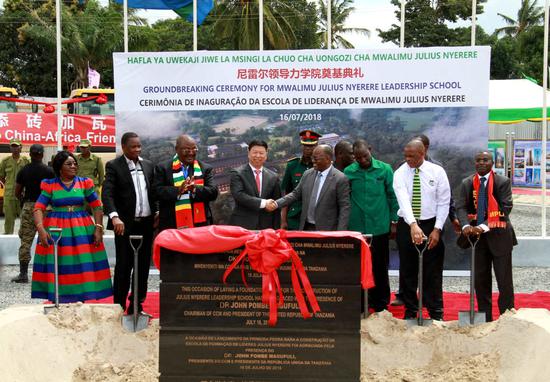 Xi Jinping, general secretary of the Communist Party of China Central Committee, sent a congratulatory message to the groundbreaking ceremony of Julius Nyerere Leadership College in Tanzania on Monday.

The college was jointly built by the the leading political parties of Tanzania, South Africa, Mozambique, Angola, Namibia and Zimbabwe.

Xi sent congratulations on behalf of the CPC and in his own name, saying the six parties in southern Africa are important forces in their countries' struggles for national liberation and economic development.

The joint construction of the college is an important measure for the six parties to strengthen their self-building and improve their ruling ability, which will play a positive role for their national development and progress, he said.

Xi said that for a long time the CPC has kept traditional friendships with the six parties, which provided important political guidance for the development of relations between them and China.

The CPC is taking this opportunity to strengthen exchanges with and learn from all political parties in Africa, including these six, Xi said.

Xi will kick off a visit to Africa later this week during his first overseas trip since his re-election as president in March.