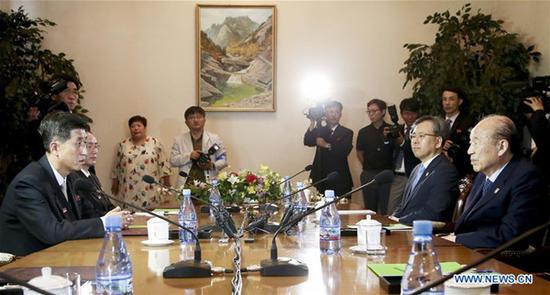 Park Kyung-seo (L), chief of the Korean Red Cross of South Korea, talks with Pak Yong Il (1st L), vice chairman of the Committee for the Peaceful Reunification of the Fatherland of the Democratic People's Republic of Korea (DPRK), during the two sides' Red-Cross talks at a hotel in DPRK's scenic resort of Mount Kumgang, June 22, 2018. (Xinhua/Red-Cross Talks Press Corps)

South Korea and the Democratic People's Republic of Korea (DPRK) on Friday agreed to hold the reunion of separated families in the Aug. 20-Aug. 26 period at the DPRK's scenic resort of Mount Kumgang.

The agreement came after delegates from the two sides had Red-Cross talks at a hotel in the DPRK mountain resort to discuss humanitarian issues, according to a joint statement by South Korea and the DPRK.

South Korea's four-member delegation was led by Park Kyung-seo, chief of the Korean Red Cross. The three-member DPRK delegation was headed by Pak Yong Il, vice chairman of the Committee for the Peaceful Reunification of the Fatherland.

During the weeklong event, 100 participants from each side will meet their relatives whom they have never contacted and met across the inter-Korean border since the 1950-1953 Korean War ended with armistice.

The reunion event was agreed upon by South Korean President Moon Jae-in and DPRK top leader Kim Jong Un on April 27, when the two leaders held their first summit at the border village of Panmunjom.

Moon and Kim agreed to hold the humanitarian event at around Aug. 25, the day to mark the 73rd anniversary of the Korean Peninsula's liberation from the 1910-1945 Japanese colonization.

South Korea and the DPRK agreed to ask by July 3 to confirm whether the separated family members are still alive in each side, exchanging the final list of participants in the event on Aug. 4.

One other family member will be allowed to accompany the separated family members having difficulties in moving about freely, to the reunion event.

The South Korean side will send an advance team to the reunion venue five days before the event, allowing them to prepare for it.

Other issues would be discussed through exchange of letters, the joint statement said.

The two Koreas agreed to renovate the reunion venue in Mount Kumgang, with the South Korean side scheduled to send an inspection team for it from June 27.

Seoul and Pyongyang agreed to continue Red-Cross and working-level talks to discuss humanitarian issues, such as the reunion of separated families.