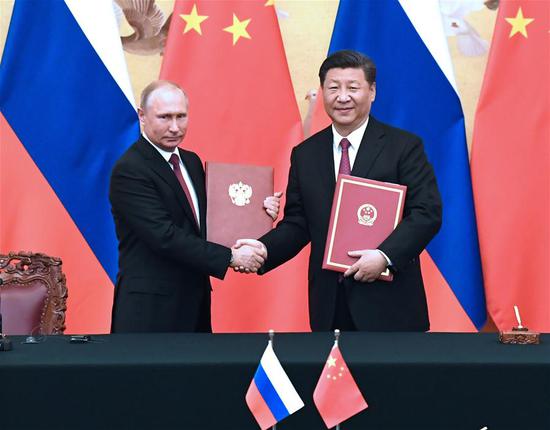 President Xi Jinping and his Russian counterpart Vladimir Putin on Friday agreed to promote greater development of China-Russia relations at a high level.

The two leaders reached the consensus during talks in Beijing.

Putin is on a state visit to China, and he will also attend the 18th Shanghai Cooperation Organization (SCO) summit in the eastern Chinese coastal city of Qingdao on Saturday and Sunday.

The two leaders agreed that China and Russia should adhere to the concept of everlasting friendship and the spirit of strategic coordination, and expand and deepen cooperation in all areas.

Xi extended congratulations to Putin again on starting his new term as Russian president, and expressed appreciation to him for choosing China as the first country he pays a state visit to in his new presidential term.

No matter how international situations change, China and Russia always firmly support each other in defending their respective core interests, deepen cooperation in all areas, jointly and actively participate in global governance, and play a pivotal role in establishing a new type of international relations and building a community with a shared future for humanity, Xi said.

China is ready to work with Russia and make unremitting efforts to consolidate high-level mutual trust, expand cooperation in all areas, deepen people-to-people exchanges and mutual learning, enhance international coordination and cooperation, pass down the concept of everlasting friendship from generation to generation, continuously enrich the meaning of the two countries' strategy of coordination, and carry forward and renew bilateral ties day by day, so as to benefit the two peoples, Xi said.

The Russia-China relations are at their best level in history and have set a good example for state-to-state relations in the present world, which has played an important role in safeguarding international peace, security and stability, Putin said.

Russia is willing to enhance cooperation with China in areas of economy, trade, investment, energy and infrastructure, he said.