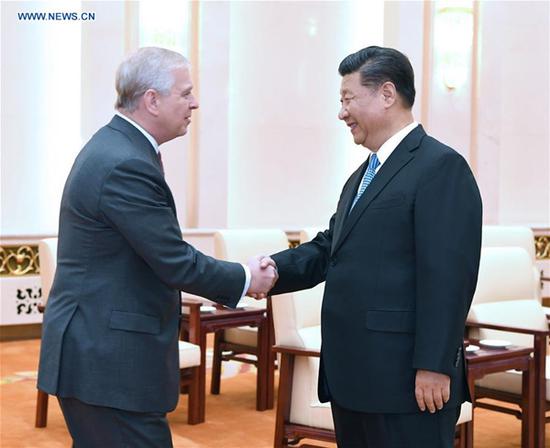 Chinese President Xi Jinping meets with visiting British Prince Andrew, the Duke of York, at the Great Hall of the People in Beijing, capital of China, May 29, 2018. (Xinhua/Rao Aimin)

Chinese President Xi Jinping on Tuesday called on China and the United Kingdom to strengthen cooperation in scientific and technological innovation.

Xi made the remarks when meeting with visiting British Prince Andrew, the Duke of York, at the Great Hall of the People in Beijing.

Xi said he appreciates the royal family's contribution to the China-UK friendship, and recalled his successful state visit to Britain in 2015, which opened up "Golden Era" of bilateral ties.

Although the current international situation has changed a lot, the "Golden Era" of bilateral ties continues its steady development, Xi said.

China is willing to work with Britain to have frequent high-level visits, hold institutional dialogue to ensure bilateral ties will have healthy and steady development along the right track, Xi said.

Xi stressed that China will continue on the path of independent innovation with Chinese characteristics and implement the strategy of innovation-driven development.

Xi said China will continue its opening up and strengthen international cooperation in innovation.

China-UK cooperation in strengthening scientific and technological innovation is conducive to mutual benefit and win-win results, and will further substantialize the "Golden Era" of bilateral relations, Xi said.

For his part, Prince Andrew thanked Xi for meeting him and conveyed sincere regards from Queen Elizabeth II.

Xi expressed his thanks and asked Prince Andrew to convey his cordial greetings to the queen.

The prince said Xi's successful state visit to Britain in 2015 advanced UK-China cooperation in a wide range of areas.

Prince Andrew said he is willing to continue to strengthen practical cooperation in science and technology, innovation and industry between the two countries, enhance mutual understanding between the two peoples, and promote even greater development of UK-China "Golden Era."

At the invitation of Chinese People's Institute of Foreign Affairs (CPIFA), Prince Andrew visited China to attend the finals of the 2nd Pitch@Palace China, which focuses on technological innovation.