Taiwan may lose more of its 'partners' 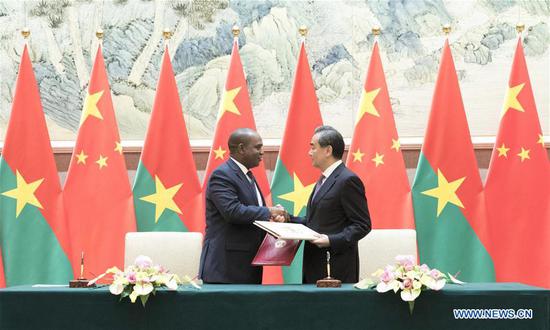 More countries may sever relationships with Taiwan if the island's leader, Tsai Ingwen, continues to refuse to acknowledge the one-China principle, experts on the Chinese mainland said.

China and the West African country of Burkina Faso resumed diplomatic relations on Saturday, after the latter distanced itself from Taiwan on Thursday. The number of countries with so-called diplomatic ties to the island has dropped to 18.

Burkina Faso is the fourth country to change its stance toward the island since Tsai, leader of the pro-independence Democratic Progressive Party, assumed office in May 2016. It is the second to back away from the island this month, following the Dominican Republic.

At a media briefing on Saturday, Foreign Minister Wang Yi said the resumption of China-Burkina Faso ties signified a step toward the goal of having all African nations join in the big family of friendly cooperation between China and Africa.

"Only one African country has not established diplomatic relations with China, and we sincerely hope that this country will soon join in the China-Africa family of friendship," he said.

Liu Xiangping, a professor of Taiwan studies at Nanjing University in Jiangsu province, said that since the Chinese mainland has a much greater influence in politics, economics, culture and military issues than Taiwan, it is reasonable for countries to adopt its stance regarding the island.

"With the growth of our comprehensive strength, China is now one of the main drivers of the world's economic development. Many countries are willing to take the road of development, and their willingness to sever relations with Taiwan has become stronger," Liu said.

Zhu Songling, a professor at the Institute of Taiwan Studies at Beijing Union University, said Taiwan's "diplomatic partners" need to establish diplomatic relations with Beijing and cut ties to Taiwan to better engage in global society.

He added that Tsai's consistent refusal to acknowledge the 1992 Consensus, which embodies the one-China principle, has harmed cross-Straits relations and pushed Beijing to consider stronger relations with those who have sided with the island.

Zhu said that countries having "diplomatic ties" with Taiwan have witnessed the island's ruling DPP go against the tide of history, adding that its refusal to accept the 1992 Consensus has jeopardized the common political foundation on both sides of the Straits and harmed the peaceful development of relations.

Liu, of Nanjing University, added that when Taiwan's former leader, Ma Ying-jeou, was in office between 2008 and 2016, the Kuomintang party, which ruled at the time, recognized the 1992 Consensus and maintained peaceful cross-Straits relations. During that time, the mainland turned down many requests from other countries to establish diplomatic ties, he said.

However, Liu said, Beijing no longer needs to be concerned, since Tsai has chosen to remain antagonistic toward the mainland.

Such actions have further harmed cross-Straits relations, and may push more "diplomatic partners" of the island toward the mainland, the experts said.