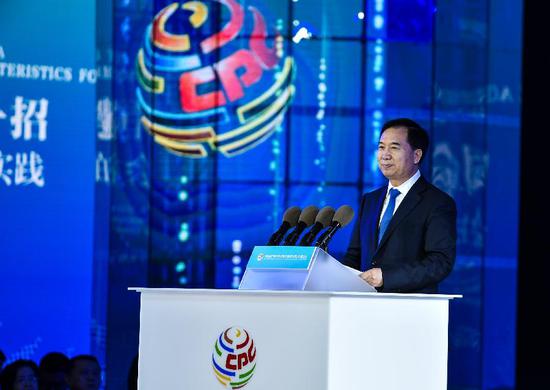 Li Xi, secretary of the Communist Party of China (CPC) Guangdong Provincial Committee,addresses a meeting with the theme "Reform and opening-up holds the key to the destiny of contemporary China" held in Shenzhen, south China's Guangdong Province, May 27, 2018. (Xinhua/Mao Siqian)

China's reform and opening-up has not only yielded top results, but also provided valuable experience to the world, according to attendees of a meeting held in Shenzhen.

The meeting, with the theme "Reform and opening-up holds the key to the destiny of contemporary China," was held in the southern Chinese city on Sunday. More than 500 representatives of over 200 political parties from over 100 countries attended.

This year marks the 40th anniversary of China's reform and opening-up. Guangdong Province, where Shenzhen is located, is the birthplace of the policy, and the Shenzhen Special Economic Zone is one of its landmark achievements, said Li Xi, secretary of the Communist Party of China (CPC) Guangdong Provincial Committee.

"Shenzhen was a small fishing village at that time. However, it has become an international metropolis with nearly 1,000 buildings exceeding a height of 100 meters," he said.

Lineth Guzman, vice president of the Senate of Bolivia, said China's reform and opening-up has offered huge opportunities to other countries.

Guzman said she believes the Chinese government will achieve its goal of eliminating rural poverty by 2020, and Bolivia, which shares similar goals in terms of poverty reduction, is willing to adopt China's experience in pulling people out of poverty.

Representatives also expressed their willingness to learn about governance from the CPC.

Gustavo Rene Hein, chairman of the Republican Proposal Party in the Entre Rios Province of Argentina, said he was very impressed by China's development under the leadership of the CPC, including its long-term planning.

According to Hein, China's rapid development has attracted increasing attention from the world. At the same time, China's opening has made its achievements visible to other countries, which can learn from them.

China's achievements in the past 40 years through reform and opening-up is truly remarkable, and they have answered many questions, said Sergey Zheleznyak, deputy secretary of the General Council of the United Russia Party.